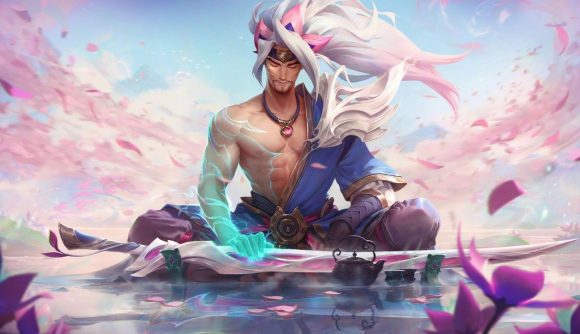 In January this year, League of Legends developer Riot Games announced its flagship MOBA game would be getting 120 new skins over the course of 2020 year (I know, phwoar). We’ve had a bunch already, ranging from some new High Noon additions to those medieval-inspired RPG skins, and of course the brand-new batch of summer-ready Pool Party looks. Now, Riot’s announced a new skin line altogether, on its way to the game: Spirit Blossom. And, we’ve got our first look at the new skins.

The new skin line was unveiled at the recent online Anime Expo Lite during a panel on the ‘History of Skin Thematics in LoL’, in which the studio talked about the game’s anime-style cosmetic offerings. At the end, Riot shared a teaser for the new alternate universe – and while the clip of the panel is now set to private, Riot influencer manager Mel Capperino-Garcia has shared the two images from the show on Twitter, which you can check out below.

Until now, Riot’s given away very little about the skin line other than its general theme, with initial images painting a picture of another anime-inspired range, with a delicate, painterly feel, gentle hues, and a strong link with nature. Now, the LoL Weibo channel has shared images of the very first Spirit Blossom skins.

According to the channel’s post, the lucky Champs first in line for Spirit Blossom looks are Thresh, Vayne, Yasuo, and Teemo – with the latter even getting a Prestige, too! Take a look below (via Moobeat):

In addition, the next League of Legends Jungler Champion, Lillia, has been officially unveiled. Head to that link to find out everything you need to know about the incoming character so far.

Of course! Sent you a DM but incase anyone else wants to 👀👀👀👀👀👀👀👀 pic.twitter.com/gCbORE5FZN

Also be sure to check out the LoL patch 10.14 notes so see what’s headed to the game later this very week. You can also check out the best anime games on PC.