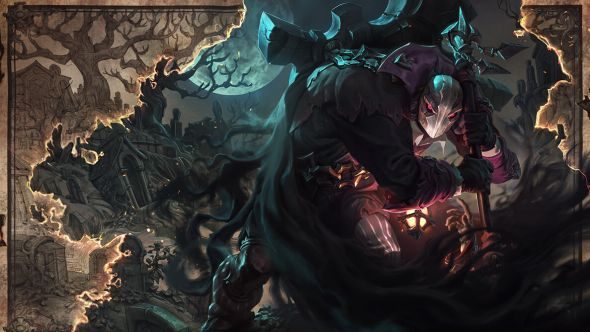 Update August 24, 2016: The Yorick rework has been revealed in full.

Riot’s next rework is now up for testing, with new abilities, lore and looks for Yorick the Gravedigger, aka the Shephard of Lost Souls. Here’s a breakdown of his abilities, with a bit of footage for each.

Mist Walkers are ranged minions that fight for Yorick, summoned by his abilities. He can have four active at most. He sometimes creates graves when minions or neutral monsters die near him, and always when champions do.

Yorick’s next basic attack will have a bit of lifesteal and deals extra damage. Creates a grave if it kills the target. Three or more nearby graves and Last Rites on cooldown gives access to Awakening, which raises Mist Walkers from the graves.

Summons a wall of corpses encircling a target area. It can be attacked and destroyed, while allies can move through it freely.

Throws a projectile that explodes into a line. Deals damage and slows anything it hits, marking the target. Yorick and Mist Walkers get a move speed buff moving towards marked targets.

R – Eulogy of the Isles

Yorick summons the Maiden of the Mist, a powerful minion who moves and attacks on her own. Brings Mist Walkers with her at higher ranks,. When attacking the same target, Yorick deals bonus magic damage based on the target’s max health.

For lore and tips on playing him, here’s Riot’s official post. He’s a part of the League of Legends patch 6.18 PBE cycle, along with a host of balance changes and bug fixes. Riot also streamed him being played the first night he was available to test:

Update August 23, 2016:The League of Legends social channels have released a proper look at the Yorick rework via that most detailed of mediums: gif.

Still no solid info on gravedigger Yorick’s upcoming rework, but Riot continue to show him off in little teases. Yesterday a gif was released of his new model and a new ghoul animation.

Old man’s looking good. Probably best to stay out of the way of his friends, though.

Chances are we’re either in for another fortnight of teasing, or Yorick will pop up in the 6.18 patch cycle which we’ll see enter the PBE tomorrow. We’ll have our usual dedicated post ready for that, so check back tomorrow.

Original story August 19, 2016:The tragic gravedigger of Shakespeare’s Hamlet, err…sorry, Riot’s League of Legends, is set for a new beginning as hints of his rework begin in earnest.

Yorick, the much-maligned ghoul haunting the top lane, has been due a refresh for quite some time after his outdated set of abilities have gone completely untouched for what seems like years in the fast patch cycle that LoL has adopted.

However a single teaser image, shared across Riot’s Facebook and Instagram accounts, depicts the shovel Yorick lugs around and smacks champs and minions with, priming the next go on the refreshinator in the coming weeks.

You will not forget. #leagueoflegends #leaks #abouttime #whodat

Riot have previously hinted that Yorick’s rework would be completed somewhere between the 6.18 and 6.21 patch cycles, so that puts his rebirth at a solid Soon™.

After Taric’s successful refresh, hopes are high for a much cleaner cryptkeeper to emerge from the other side, but until we see it we won’t believe it.