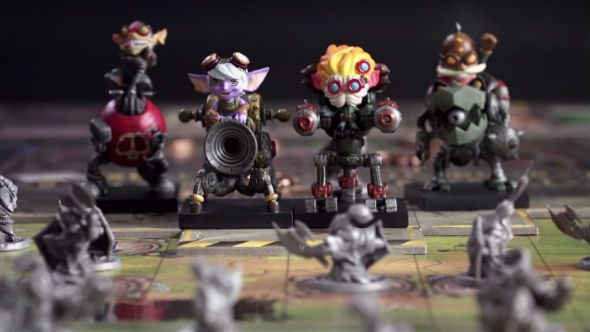 As a one-game developer, it’s generally assumed that any product leaving the doors of Riot Games will be stamped, branded, and bound by the four letters of its home genre. The company has lived and breathed MOBAs for a decade, which is why Mechs vs Minions, the new board game based in the League of Legends universe, came as something of a shock to players when it was inadvertently leaked to the internet last week.

Related: the best League of Legends champions for beginners

Riot has now released the game’s full details online, and as you might have noticed, it’s a board game. But more importantly, it’s a cooperative experience which uses the LoL IP to its own ends. Any new product bearing the League name is a promotional tool of sorts, but Mechs vs Minions isn’t an adjunct to the MOBA experience – it’s very much its own entity. We caught up with the game’s producer, Chris Cantrell, to find out why one of the world’s most prestigious videogame developers is has chosen to bring Yordles to the tabletop experience.

PCGN: How did Mechs vs Minions come to be?

Cantrell: A lot of the stuff we work on at Riot stems from some passion. We try to hire gamers and our staff play all different types of games beyond League. Console games, mobile games, many different types of gaming experiences. We have a very vibrant board game community here and that was something that we started really taking into account. Personally I’m a huge fan of modern board games and how they’ve evolved.

We thought that if we could introduce this hobby at a price point that League players would accept that it would turn them on to this renaissance that’s happening in board games. 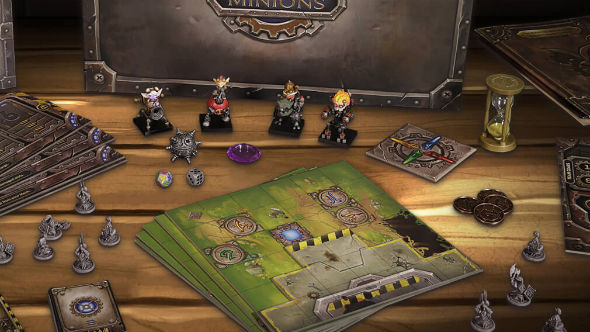 The game uses the League of Legends IP, so why develop a cooperative rather than competitive experience?

In a competitive game you really benefit from matchmaking; if we logged on and played League or Overwatch we’d be paired with people of approximately the same skill level and that feels like a really rewarding experience. However, if you and I were to sit down and play chess and you’re much better than I am, we might play once and you’d decimate me, then if we played another game you’d just crush me again. It wouldn’t be fun for you to keep playing because I’m not providing the challenge and it wouldn’t be fun for me because it’d be painful to lose over and over again. When you have players of different skill levels it can be daunting, especially to the newcomer. They’re learning all these rules and it’s a foreign world for them and when they lose they don’t feel great. Whereas in a cooperative game, if you’re a better player that makes you carry your team more, and everybody is excited about that.

As we were designing the game it actually started off competitive but because of the way you deal damage and the way craft your schematic cards it felt very swingy. The game would be decided upon what type of damage you drew or if you had a turn card in your draft or not. This was all mitigated substantially when everyone was working toward the same goal.

Randomised elements like that are par for the course in board games. There’s less of that in League, so will LoL players still enjoy Mechs vs Minions?

I hope so. Our goal wasn’t to recreate the League experience; we already have League for that. We weren’t thinking ‘how do we show people what a MOBA is in the board game space?’ We try to make every product that we create inspired to appeal to core gamers and it didn’t make sense for us to try and make MvM into a MOBA. Rather, we wanted to find something that was fun, something that we enjoyed playing, and something that would resonate with players. It was much more important to us to make a game that we liked than replicating the League experience.

So in the absence of PvP, how do you keep a board game exiting?

Its got to be really, really hard. That might turn off some people, but this game isn’t meant for everyone, the same way that when we made League of Legends it wasn’t meant for everyone. When League launched it came out of a need to service the Warcraft 3 and Defense of the Ancients community. We weren’t trying to garner widespread appeal, we were just trying to do one thing really well. 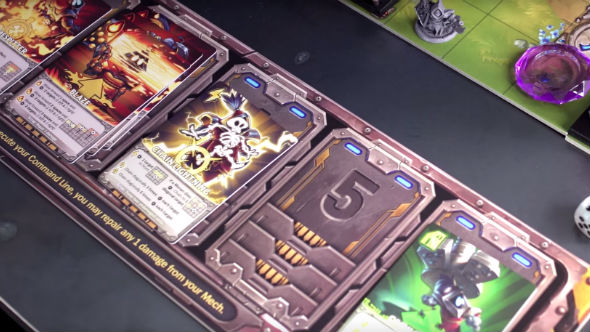 The promotional video describes MvM as a ‘programmatic game’. Explain that to us.

Every round you draw five cards (if there are four people in your game) and each person picks one program that they want to add to their command line. Each card goes into one of these six slots in front of you, and as long as they’re the same core energy you can kind of stack them.

You draft your cards, your put them in their slot, then you execute your command line and afterwards the minions move or attack. Sometimes they’ll make your mech go haywire and you’ll have to add stuff you don’t really want to add to your command line, There are a lot of different permutations and that’s where a lot of choice lies. The essence of great games are making engaging choices.

Doesn’t that leave players largely inflexible? You must be able to switch around cards somehow…

It can be switched but not without a cost. Let’s say you have a blue move card on your command and you don’t really need it any more but you need a turn – you can put it on top of that move card and it’s actually an even better turn. Instead of turning 90 degrees maybe it can turn 180 or maybe you don’t have to turn if you don’t want to. That’s probably the best way to keep augmenting and changing what your mech does.

The other option is that when you’re drafting a card, instead of putting it on your command line, you can scrap it, which is basically discarding it for an effect. This can also allow you to repair one point of damage, so you get back functionality you used to have.

If you scrap a green or a yellow card, you can reprogram two slots, and you can swap what’s in slot 6 with what’s in slot 4 or whatever. As long as they’re both undamaged you can move them around. So there are opportunities; you’re not locked into a choice that you’ve made in the first round so that you can’t keep evolving. But on the flipside, it comes with a cost because you’re sacrificing your power growth.

Whilst all this is happening how are the minions providing an interesting challenge?

It’s different per scenario. Often the minions will head in a certain direction based on one of our objectives. In one of the first real missions you’re trying to push this bomb-like power source out to a repair pad, and wherever it’s at on the board minions will try to move a step closer to it. In other missions they do different things: sometimes you roll the dice and they move around randomly, sometimes the pattern is static and they just keep charging ahead three spaces. Your job is to anticipate that. 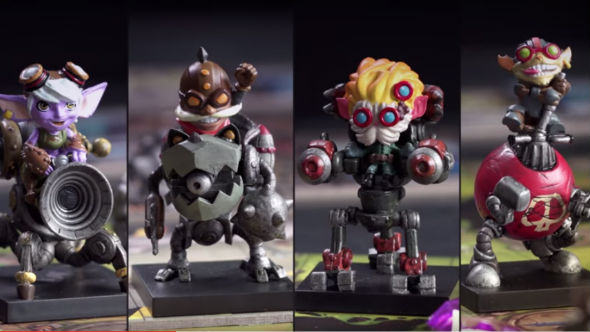 Why choose four Yordles as the playable champions?

I find Yordles to be very whimsical and kinda silly. and when we were looking through the story of the game that really resonated with the experience. I think very early on we were exploring other options because it’s a programming game and we have these sentient robots in League. With champions like Blitzcrank and Orianna there are definitely opportunities to do programming, the problem is how MvM works when you get damaged. You’re never removed from the game or anything like that; you don’t have HP, but as you get damaged your mech starts going a bit haywire.

Sometimes you can kinda work with it and it can even be beneficial, but a lot of the times it’s more like ‘Oh no, I don’t wanna turn here!’ and you end up running into a wall or you’re speeding into a wall of lava and you take even more damage. This all feels very chaotic and silly and if you’re playing a sentient creature like Blitzcrank then it doesn’t hold up, it just feels very frustrating. You’re like ‘I wanna go THERE and now I’m turning and running into a wall’ and this creates a sense of frustration. Whereas Yordles (specifically Rumble) are kinda slap dash; they throw their mechs together with scrap metal and the mechanic makes a lot of sense within the game’s context because Rumble is teaching these other Yordles how to pilot a mech. The Yordle / mech thing creates a sense of silly chaos rather than frustrated lack of agency.

Are there ways to directly aid one another when this silly chaos takes over?

There are! As you keep playing through the game you unlock the mission dossiers but one of the other things that you get is new schematics,and they’re different per champion. In later games you might have a list of six options and you can only ever bring in two. Some schematics are selfish and let you blow up huge clusters of minions, whereas others let you upgrade your allies or heal. You can do loads of things like push each other and tow other mechs, and this all creates hooks to encourage everyone to collaborate.

One of the things that we wanted to avoid was quarterbacking. You’ll have one alpha player who has simply played the game more and if you don’t have a very rich decision space in front of you…. I mean I love Pandemic, I think it’s a beautifully designed game, but if I could make one polite critique, it’s that more experienced players dominate. It can end up feeling like one person is playing the game and everyone else going with the flow and that’s not really collaboration. We worked really hard for a long time to make sure we couldn’t have any quarterbacking in the game. The decision matrix in front of you with all the different permutations and the time component of drafting cards makes it really difficult for me to be the expert on other people’s command lines. The tends to be more about people saying ‘can you get that minion?’ than ordering their friends to add specific cards. I think that’s a really exciting place for a coop game to live. 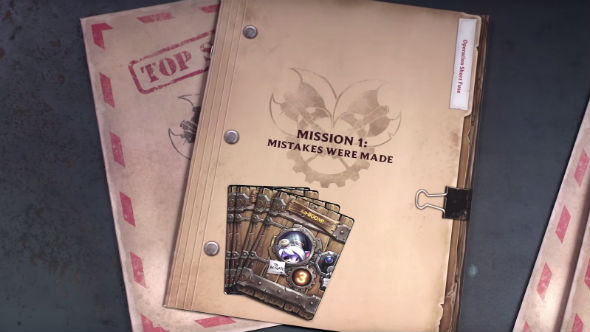 Is this the beginning of a brave new world of Riot games outside of League?

This was a board game and a passion project, I don’t expect this to enter the space as a long-term part of our portfolio. Frankly it was just done as a one-off.

I will caveat that by saying that at Riot we try to listen to our players and if the demand for the game is there and it feels like it’s resonating, either in the board game community or with our players, I think it’s something that our team would love to keep doing. Ultimately, however, it’s not a big moneymaker for us. This was never intended to be a big needle mover.