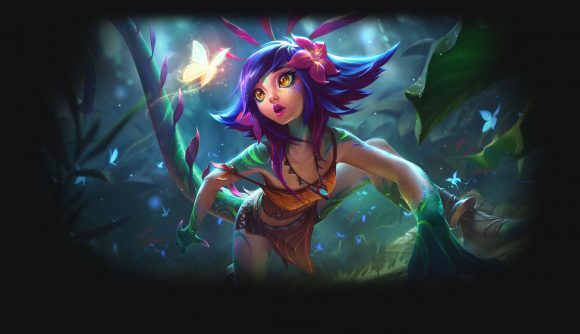 League’s newest hero Neeko is a curious, magic-using chameleon who can change herself to look like her allies. She’s also League of Legends’ first character written as openly gay.

Riot Games unveiled Neeko with an introductory video over the weekend, in which she showed off some of her shape-shifting abilities. She also has an official entry over in Universe, League of Legends’ official repository of game lore.

What her story doesn’t mention, however, is that she’s lesbian. Players noticed that Neeko comes across as friendlier toward female characters in the game, and Riot’s head writer confirmed that it’s because of her sexuality.

Riot senior narrative writer Matt Dunn explained on Twitter that Neeko’s apparent interest in women is due to the fact she “identifies as a lesbian.”
Dunn provided a few other details about Neeko that weren’t made explicit in her official story.

“In actual years, Neeko’s a couple hundred years (vastaya lifespans are very long),” he said to one fan on Twitter. “In scale of maturity, she’s in her late teens/early 20s.”

Neeko is also “currently single and looking,” Dunn said to another. “She loved Nidalee, but it was unrequited.”

Dot Esports noticed the discussion on Neeko’s sexuality. While they suggest Neeko is the second LGBTQ character after Varus, I’m informed by Ali that Varus is a demon who personifies the union of two male lovers, but who is not, as Varus, gay himself.

She doesn’t “seem to”, Neeko *does* like female champions more than male champions. Neeko identifies as a lesbian.

Dot Esports expects Neeko to show up with Patch 8.24, in about two weeks or so. She’ll be League’s 142nd champion.