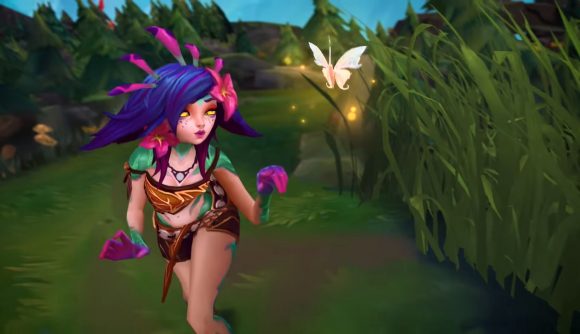 League of Legends has unveiled its newest champion, a shape-shifting Vastayan mage named Neeko. She was introduced in a short video posted by Riot Games yesterday that provides a quick look at her personalities and abilities.

Neeko is shown as a nature-loving, freckled, curious forest sprite with a chameleon’s ability to take on the appearance of things she touches. In the video, she encounters a fanged bullfrog for the first time, and mimics its ability to inflate its throat.

Then we’re treated for some in-game footage that provides a rough idea of what she’s capable of on the Fields of Justice. Neeko can apparently take on the appearance of other champions, turn herself temporarily invisible, and create illusory clones of herself. Riot hasn’t provided a breakdown of so far, but she seems to be a trickster character who relies on skillshots for damage-dealing.

Dot Esports points to Neeko’s newly-published Universe lore, which describes Neeko as a member of a tribe that communicates through their shapeshifting abilities. During the devastation of her homeland, Neeko escaped by taking on the form of a bird, eventually stowing away in a ship headed toward Harelport.

Despite losing her home and becoming a refugee, her story goes, she has held on to her childlike wonder about the world, and seeks friends wherever they may be.


Dot Esports reckons Neeko will be available to play in about two weeks, when Patch 8.24 comes out. She looks like she’ll be an entertaining champion to get to know. Or, uh, be.