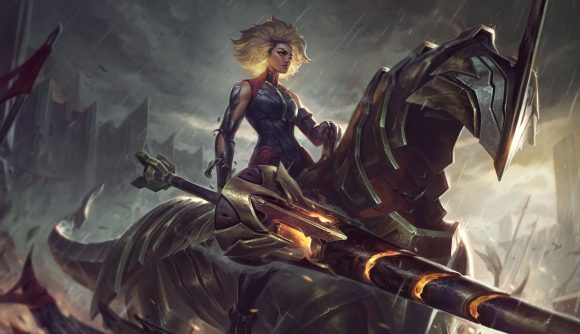 Well, League of Legends fans – the multiplayer game’s final Champion reveal of the year has landed. Called Rell, the latest Champ headed to the MOBA game has been officially announced by Riot Games, along with her abilities and background – she’s a “tanky support” who “rides a furious storm of steel into every fight”. Neat.

Also known as The Iron Maiden, Rell has an impressive roster of Champion abilities at her disposal, which includes a W that comes in two distinct parts. The first of these – W1 – Ferromancy: Crash Down – sees Rell (while mounted) “leap and transform her mount into heavy armour, gaining a huge shield that lasts until destroyed or remounting”, Riot says on Twitter. “On landing, she knocks up enemies around her. Rell can cast her E and R during the change.”

As for part two, when armoured, Rell rushes forward, turning her armour into an impressive metal mount, which grants her a burst of movement speed – and, when she next attacks, she “charges her target to deal bonus damage and flip them over her shoulder”. Phwoar.

Rell attacks very slowly, but temporarily steals a portion of her target’s Armor and Magic Resist to deal bonus damage based on the amount stolen.

“Born to an agent of The Black Rose and a ranking Noxian soldier, Rell’s magic manifested at an early age—in the incredibly rare form of ferromancy, or metal manipulation,” the studio says. She was sent to “an academy for magical kids, to be turned into weapons for Noxus”, it continues.

Rell stabs forward with her lance, breaking any shields and damaging all enemies hit (damage decreases after the first target).

If Rell has an ally bound with E – Attract and Repel, she and that ally recover health for each champion hit by this ability. pic.twitter.com/U4X8oRMNJn

However, “as she bested the other students and grew increasingly powerful, they began to disappear. Torn from her life, just as the instructors tore the magic from their bodies and implanted it into Rell, their ultimate weapon”. Gulp.

Rell magnetically binds a piece of her armor to a target allied champion, granting them bonus Armor and Magic Resist while nearby.

Rell can recast this spell to break the bind and stun all enemies around and between her and her bound ally. pic.twitter.com/ppxiWOGpWC

You can take a look at how this is infused into her abilities and playstyle via the tweets embedded above and further down this story (as well as her cool tanky Champ-meets-jousting-knight approach in action in the gameplay preview clips).

(While armored) Rell rushes forward and transforms her armor into a mount, gaining a burst of movement speed. During her next attack, she charges her target to deal bonus damage and flip them over her shoulder.

“I wanted to make Rell the tankiest tank the world has ever seen,” explains game designer Stash “Riot Stashu” Chelluck in the dev post. “I had this idea of a heavily armoured character who sunders the ground she walks on, making the earth beneath her collapse from her might. Unfortunately that’s hard to display in League, and I still needed to make sure she thematically felt like she was manipulating metal. I was looking for neat ways to map her ferromantic powers into her gameplay, to really make her feel powerful and hard hitting without feeling like a mage.”

Rell erupts in magnetic fury, yanking nearby enemies toward her. She then creates a gravitational field around her, pulling nearby enemies in for a few seconds. The field doesn’t interrupt her enemies’ other actions. pic.twitter.com/pADXB99YXn

Rell is due to hit the live game on December 9 along with League of Legends patch 10.25 – the last of the year. That update will begin to hit the game’s PBE for some tinkering before that, however, so keep checking back as we’ll have notes covering everything you’ll want to know once it arrives on the testing servers. Also be sure to check out our League of Legends patch 10.24 notes to find out what’s coming to the game this very week.