The winds of change blow hardest through the MOBA, scouring the land of OP-ness and raising new statues to take their place. Patch 5.14 has come to League of Legends, bringing with it some major redesigns to champions Gangplank and Miss Fortune, a whole new in-game HUD and a new item. Plus all the usual bug fixes and minor changes. To the details-mobile.

The changes that will affect the most players are those made to the HUD. It’s not a total redesign and there haven’t been any alterations made to the out-of-game client, but what has been done is significant. As little screen space as possible is now used to convey vital information about your character, but all of that is as clear as possible. It’s a marked improvement and miles ahead of some competitors – one of the biggest complaints I hear from League players trying to break into Dota 2 is how much screen space is monopolised by mostly-cosmetic UI.

There’s also now more information about what your team is up to displayed around the mini-map and personal stats and team scores have been moved to this frame as well. Rather than glancing at three different places, this info is now all contained. SImilarly, when targeting an enemy more information will be displayed immediately, and the scoreboard has been made to be more customisable, display more information and take up less space. Overall, it looks fantastic. You can review it all here. 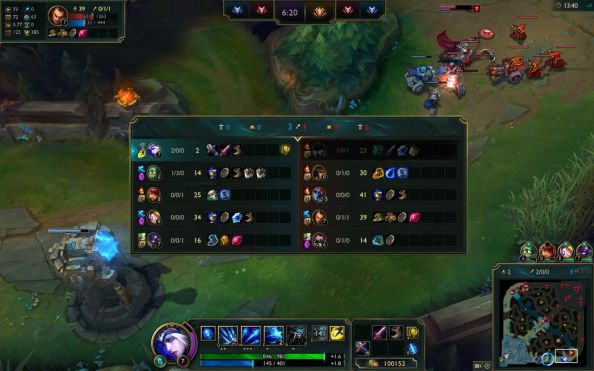 On the balance front, both Gangplank and Miss Fortune earned posts of their own to detail their changes. Gangplank’s are more serious, redesigning a large amount of his kit to play in a completely different way. His new powder keg barrels are a personal favourite – they’re essentially mines that need to be attacked to explode, though if enemies do so they’re defused and grant gold. They also chain together, letting you set up intricate traps from afar or inflict multiple blasts with only one shot.

MF had less serious changes, removing a debuff from one of her abilities but letting her more reliably trigger her movement speed increasing passive in a number of ways. She’s also had a visuals update for both her model and spell effects, though still looks like she hasn’t had a good meal in about five years. And oh so very cold.

The last major addition is a new item, Zeke’s Harbringer. It’s designed for support characters to use and lets them bind to an ally and start building charges with both their attacks and spells. Once 100 stacks of this are reached, a buff is applied that increases spell damage and crit chance significantly. It looks ludicrously powerful to my low-level eyes, but most additions to the game do.

As for the balance tweaks to the rest of the cast, I enquired with experts (my group of friends who play League of Legends on a regular basis and are all around high-Platinum, low-Diamond skill level) and they seemed mostly happy. Long-time problem child Azir seems to have been nerfed into the ground, while buffs to recently introduced frog-giant Tahm Kench and time-boy Ekko were met with raised eyebrows.

Who’s playing out there? Any initial thoughts?