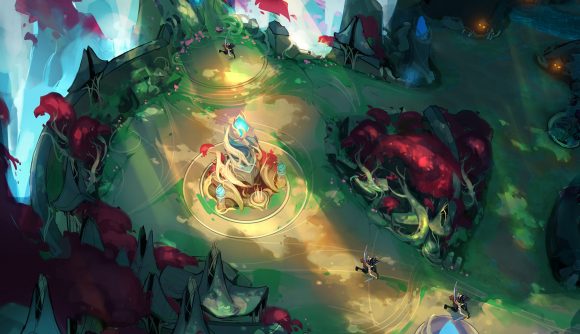 As part of the upcoming League of Legends summer event, Riot Games is bringing back Nexus Blitz, an experimental game mode for the MOBA. This latest version will have some tweaks, including a new map, and will continue to be modified throughout the event.

The League of Legends dev blog has a formal breakdown of this latest iteration of the 5v5 mode, in lieu of LoL patch 10.14. The first major change is that Nexus Blitz now has one map, an Ionian forest, that’s currently unnamed. The next is two new events, Protect the Soraka and DPS Check. Protect the Soraka has two sides compete to destroy the opposing team’s Soraka bot, while DPS Check is a competitive practice mode where you and an opponent see who can damage a Teemo dummy the most. Previous events, like the variations on Bardle Royale and Push The Cart, are still available.

Elder Dragon is the latest reward, allowing players to execute opponents who have a certain amount of health. Nexus Blitz was first introduced from July to September 2018, and Riot is making it clear this version is still a work-in-progress as the developers take player feedback on what works and what doesn’t.

Riot has been gradually reworking Champions of late, having rolled out an update for Volibear, with Dr. Mundo on the way for 2021. This year, a new four-checkpoint “followup process” is being implemented on Champion releases and overhauls.

If you’d like some cheap LoL goodies, we have this week’s best LoL deals. Nexus Blitz will arrive with the 10.14 patch on July 8.