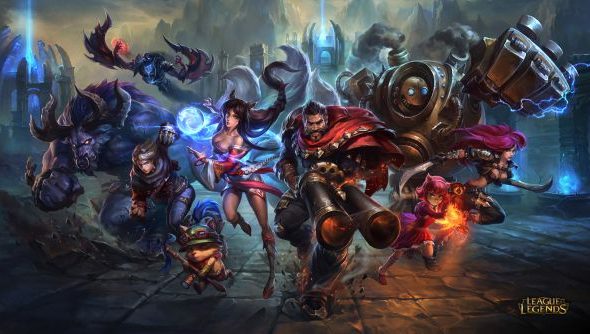 Dota 2 had 10 million players log in over December. And lest we forget, that’s the little fish – League of Legends has more active users than any other PC game.

Nvidia have caught onto the fact that MOBAs are “the most popular games available worldwide”, and their players the perfect audience for mid-range GPUs. They’re hoping that LoL summoners will adopt the £159.99 GTX 960 – both for its “beautifully crisp, sharp image”, and power requirements so low that the fans will turn off during play.

Nvidia have now sold over a million GTX 980 and 970 GPUs – a “huge, huge number” for ultra-high end graphics cards.

But the majority of Tuesday’s press call was given over to Nvidia’s mid-range cards. Steam’s hardware survey shows that two out of three Nvidia users own a GTX 660 or older – and an awful lot of them are playing LoL or Dota.

It’s that audience that Nvidia are pitching the new GTX 960 to, as a relatively affordable upgrade.

“They want to purchase a GPU they know will work perfectly, and will continue to do so for the next couple of years,” said Nvidia’s head of consumer PR, Ben Berraondo. “It’s the most cost effective way of getting a high-end gaming experience”.

The 960 is designed for DSR – the technique that sees 4K images downsampled to 1080p and which works particularly well in MOBAs.

What’s more, the card can “intelligently” control its fans in a way that’s “perfect for MOBA gaming”. If you’re running LoL at maximum settings with 1080p and 60fps, the 960 will consume only 30 watts of power.

“That really is truly unheard of,” said Berraondo. “That means you’re using so little power that the card’s fans will actually completely turn off. You’ll have truly silent gaming.

“GTX 960 is all about Maxwell hitting that sweet spot of GPUs. It’s twice as efficient as our previous generation.”

As you’d hope, the 960 can handle “top games” too – Nvidia namechecked Watch Dogs, Assassin’s Creed: Unity, Beyond Earth, Battlefield 4 and Thief as games that’ll run at high settings with an average framerate of 60fps.

And the GPU is “one of the most overclockable cards Nvidia has ever created”.

“We fully encourage users to go and test cards and overclock them to see just how good they are,” said Berraondo.

Are any of you lot in need of an upgrade? Or do you need the purr of a GPU rolling through the house to get to sleep at night?