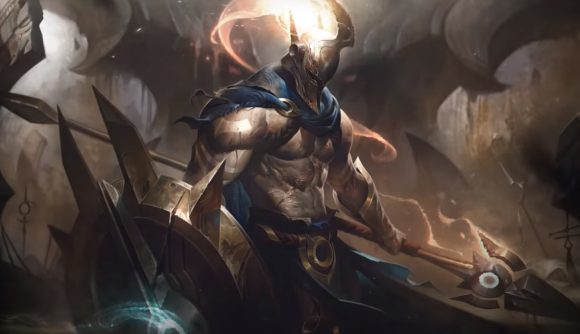 League of Legends developer Riot Games has just lifted the lid on its next champion rework. In line with hints dropped earlier this year, Pantheon is the next champion to undergo a full visual gameplay update.

In a trailer shared earlier today, Riot took fans behind the scene on the rework. Once known as the Artisan of War, after the update, Pantheon will be known as the Unbreakable Spear. In the video (which you can watch further down this article), the developers make clear that the champion’s Spartan aesthetic will remain, but more could be done to give him his own personality.

Pantheon’s lore will be tweaked in line with his new update. While a skilled warrior named Atreus used to play host to the godlike Artisan of War, that god was eventually defeated by another champion, the demonic Aatrox, giving Atreus back control of his body. The mortal warrior has returned, but as the trailer shows, he’s been scarred by his experiences.

Riot’s devs say that Pantheon’s old skills meant that many of his fights played out in the same way, but felt like they couldn’t move too far away from the original concept. The video shows off some of his new skills, including a line skillshot version of his Q, a W that still allows players to leap to their target, and an E that looks like it provides some increased defenses.

All of the champion’s abilities have been changed, but Riot says that his iconic ultimate his “mostly the same.” Renamed ‘Grand Starfall’ the ability now brings Pantheon in at an angle, seeing him streak across the map, which should make it easier for skilled players to hit more enemies.