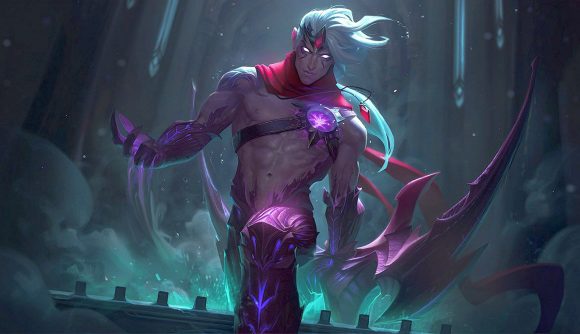 It looks like we might have an idea of a new skin headed League of Legends champion Varus’ way. That’s thanks to a tweet celebrating the marksman champ’s birthday that went live over the weekend which offered a snapshot of a skin fans haven’t seen before – a teaser of what looks like a Project: Varus splash. But, mysteriously, this ‘reveal’ has now disappeared.

As reported by Dot Esports, the original tweet was posted by the main League of Legends Twitter channel on May 8 and read, “Happy b’day Varus! What should he wear to celebrate?” alongside nine numbered tile images of Varus’ various skins. Number three immediately caught the MOBA game’s fans’ eyes as it’s not a skin we’ve seen before, let alone one currently available for the champ.

Based on the splash art, fans are guessing this could be a teaser for an upcoming Varus skin in the Project alternate universe line. It’s got all the hallmarks of one based on skins we’ve seen before, such as a glowing v-shaped visor, a retro-futurist style armour, neck scarf (quite like Project: Yasuo’s own), and a triangular emblem on his chestplate.

The tweet has since been deleted and it doesn’t seem there are any other similar posts on League’s Twitter channels, so it looks like this reveal might have come a little early. We’ve reached out to Riot Games to ask about the post and, if it is a teaser for an upcoming skin, when it might head to the game. We’ll update this post with any new information.

If you’re keen to see the original post, you can check it out via this Imgur link right here, which an eagle-eyed fan captured before the tweet disappeared. For now, you can also check out our League of Legends patch 11.10 notes to check out the batch of new skins coming to the game very soon – Arcana styles for Camille, Lucian, Tahm Kench, and Xerath – plus all the balance changes and other bits on the way.