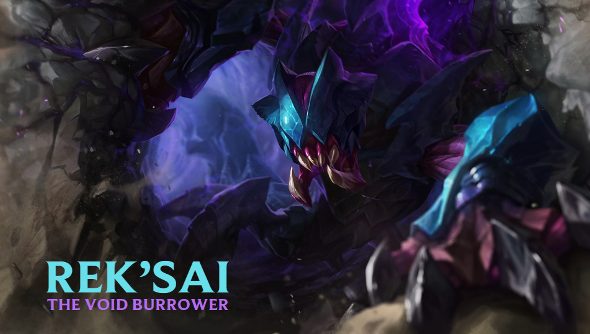 League of Legends has its fair share of grotesque champions, and the roster of horrors has just been expanded, with Riot revealing Rek’Sai, the Void Burrower. She’s a nasty piece of work, burrowing underground, creating tunnels, waiting to jump out and bite unsuspecting champions.

She’s a terror, but has a bit of trouble dealing with another new champion, Kalista, as well as Kevin Bacon.

Rek’Sai is most at home in the jungle of Summoner’s Rift, where she can get around quickly thanks to her tunnels. She can be a thorn in the side of enemy junglers, too, as her ability, Tremor Sense, lets her see where her foes are not, and then steal camps, depriving the other team.

“Now that we have a burrowing character who can track prey at great distance without their knowledge, what’s left? To be a true hunter, it’s not enough to simply know where your prey is,” explains Riot. “It’s about finding the right moment to strike. To do this, Rek’Sai needed to be flexible in how she moved around the map, to dance around the target she was stalking while remaining undetected. This is where Tunnel comes into play. Underground, Rek’Sai is the master of her domain and she doesn’t care for paltry restrictions like walls. Tunnels give her the freedom to be anywhere on the map at any time and really think about how and where she wants to strike at her unsuspecting prey.”

Fancy taking this mean lady for a spin?