In a three part series that’s currently running on Riot Games Engineering, one Peyton Maynard-Koran – a technical director at the LA-based outfit – outlines how the current internet isn’t fit for purpose when it comes to online games such as League of Legends. Riot’s response? They built their own internet.

Have a gander at the best League of Legends Champions for beginners.

The writing, for all it is wonderfully written, is a touch on the technical side but it makes for very interesting reading nevertheless. Part one and two of Maynard-Koran’s Fixing The Internet For Real Time Applications series are available to read here and here, however in short part one explores why the internet isn’t an adequate platform to stage online gaming.

Maynard-Koran uses the example of a movie buff searching for reviews of the latest flicks. Waiting, say, two or three or four seconds for a page to load isn’t necessarily a big deal in this instance – it’s very unlikely that this person needs to see the reviews in question instantaneously. Yet waiting two, three or four seconds can be a lifetime in games like LoL, something Maynard-Koran et al want to permanently change.

Part two explores how he and Riot set about such change. Again, it gets pretty techincal but the long and short of it is Riot moved their game servers to Chicago in order to provide an overall faster LoL experience for North American players, steering internet access in the most direct route as possible. Ultimately, they wanted to turn something like this:

Before this, Riot tried and failed to broker deals with big ISP companies in search of more bandwidth (such as Comcast and AT&T), so instead built their own private internet by latching onto unused ‘dark fiber’ under the ground that in turn supplemented the private network.

They say this is “one of the fastest networks on the continent”, and that the move to the Windy City saw the majority of the playerbase getting decent, sub-80 millisecond pings jump “from 50 percent to 80 percent.” Again, this is Riot’s own data, but this graph, labelled “Riot Direct Impact 11/21/2014 – 8/18/2015”, depicts these results: 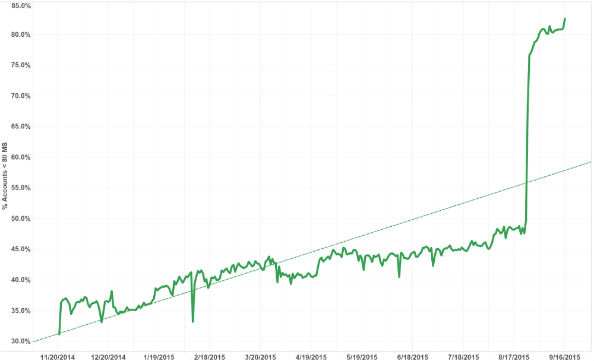 “OK, Peyton, what do we do about it?” says Maynard-Koran in reference to how latency and packet loss make real-time gaming difficult. “The answer is simple and exciting: we build our own internet. Before you call that a pipe dream, let’s briefly recap the internet’s architecture from my previous post. The internet isn’t a single unified system owned by one entity, but rather a conglomeration of multiple entities.

“When you play League, data transfers from Riot’s servers to backbone companies (like Level 3, Zayo, and Cogent) to ISP companies (like Comcast, AT&T, Time Warner Cable, and Verizon) and then finally to your set-up (modem, router, computer), before making a return trip.”

Maynard-Koran continues: “We’re not the first to tackle something like building a part of the internet; Google notably now runs fiber in some communities in the United States. But where Google is focusing on the cable running to your house, we’re more interested in creating a network like the backbone companies.

“This would allow us to pick up player traffic as close to the player as possible and then put it on our network—a network with many fewer routers (and other devices) that drop packets and degrade the player experience.”

The posts are well worth reading in their entirety as some of it really is fascinating stuff. Given how popular League of Legends already is, hats off to Riot for going that extra, literal mile(s) for its players.