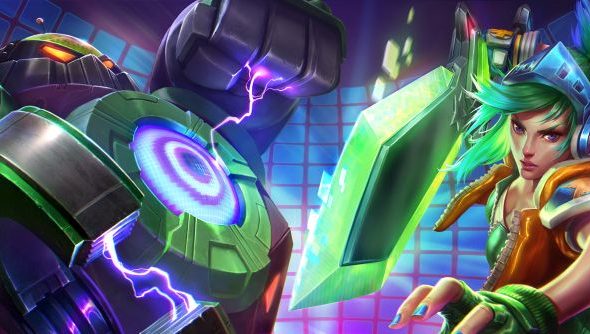 Of all the companies currently raking in that ‘free’ to play cash at a rate that would make most oil barons raise an eyebrow, I’m convinced Riot are the best at spending it. League of Legends gets as many regular updates as any of its peers, but it’s what they do outside the game that really impresses. Stuff like their Ghibli-style animated movie for a new character or commissioning Imagine Dragons to make the most ludicrously e-sports thing I’ve ever seen as a theme song for the start of the 2014 world championship. No one event is ever quite like the last but it’s always of the utmost quality with the company’s wonderful sense of humour running through. This time around it’s a full, and free, browser/phone game to go along with the release of more skins in the Arcade line.

The Arcade skins started with the release of Arcade Sona in 2012, which was actually one of the first things that made me realise what a wonderfully imaginative team Riot had for making just cool stuff. There are now alternates for Miss Fortune, Veigar and Hecarim all based around the idea of a classic retro game, styled both after the sorts of characters they might have and the gear of that gaming age.

Now to celebrate the release of Battle Boss Blitzcrank and Arcade Riven, Riot have released Blitzcrank’s Poro Roundup, a simple endless runner style webgame. In it you control grab-handed Blitzcrank as he flees from Baron, League’s largest monster, and tries to save the poros doing the same. Poros look like this, explaining your motivation to save their lives:

Having played it for about twenty minutes, it’s fun enough to get your attention and then varied enough to hold it. A little knowledge of League will go a long way to enjoying the various cameos that pop up and there’s a fairly large number of levels and characters to unlock if you get into it. Each new map also adds more complications in terms of poro types, which range from poisoning the speed out of you to being so lazy they’re liable to take a nap. There’s a boss at the end of each too, in the form of another champion from the game.

If three poros manage to slip by you and be gobbled up, Blitzcrank becomes so heartbroken he stops running and is similarly and quickly dispatched. It’s adorable, it’s fun and it’s slightly addictive.

There’s various other bits coming out of the Arcade event too. A collection of wallpapers have been made available, as well as a neat little interface for showing off each of the skins in-game (so, y’know, you buy them). Plus, there’s this pretty sweet jam that serves as the theme music: