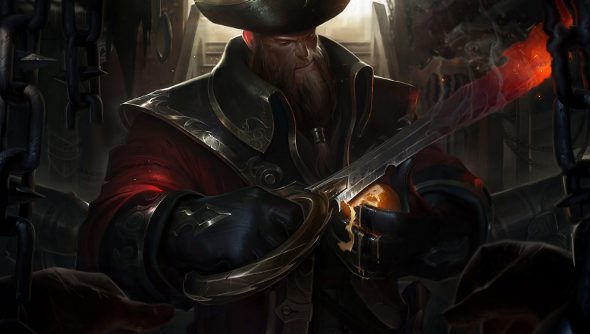 Scurvy! Dampness! Annoying talking birds! Gosh, being a pirate sounds like a lark. They love a fight, too. But they are old fashioned, not properly prepared for the modern world, which is why Riot’s given its pirate champions, Gangplank and Miss Fortune, a big update.

Gangplank is a big, burly, hirsute fellow; a pirate king. Here’s what Riot has to say about his update:

“Outside of slight optimizations such as Parrrley farming, Remove Scurvy timing, or Cannon Barrage placement, Gangplank never really had a unique tool he could invest in mastering over time. When we thought about new toys we could give Gangplank, we focused on the most fun moments Gangplank was already having. One topic came up over and over again: buying items like Statikk Shiv or Ravenous Hydra and being able to Plunder several enemies with a single Parrrley. With this update, we added explosive barrels to Gangplank’s arsenal so he can do just that and more. There’s nothing like setting up a chain of barrels to utterly decimate unsuspecting enemies.”

Miss Fortune is a pair of giant balloons on a stick with hips, the product of a sticky dream from the mind of a teenager. Here’s what Riot’s got to say about her changes:

“Miss Fortune’s in a fairly healthy state. The slight changes we’ve made emphasize her core strengths and shave some hidden power in favor of clarity. Fancy design speak aside, the TLDR is your ultimate barrage of bullets remains unblemished, but we’ve removed Grievous Wounds from Impure Shots.”

Both pirates can be found in the Public Beta Environment.