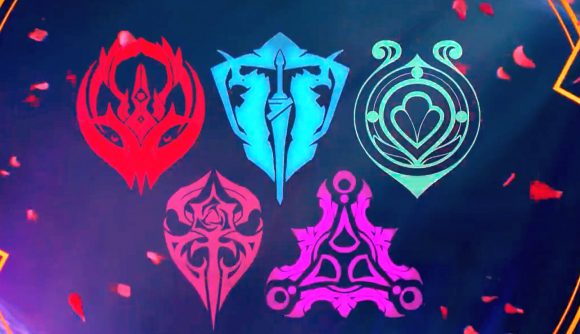 With the 2020 League of Legends patch cycle nearly at an end, the multiplayer game’s developer Riot Games has been posting some fresh new teases on social media pointing at… something. It’s not clear what the brief teasers mean just yet, but it’s possible we could have an idea of some new skins on the way to the studio’s flagship MOBA game.

The first – posted on Twitter and included below – is a 15-second-long clip showing five colourful crests with a cool swirly visual effect, and a single sentence: “A symbol of her royalty, a queen’s crest is as much a reward as a responsibility!”. As you can see if you head to the list of League’s existing skin lines released so far, the symbols in the teaser and the clues about royalty and a “queen’s crest” don’t really seem to match up to anything in the game so far.

However, the teaser could possibly tie into a “new thematic” that Riot mentioned it wanted to release before the end of 2020 in a dev update a few months back.

At the time, the studio said: “there’s still one more new thematic we’re looking forward to releasing this year”, alongside a piece of concept art showing some colourful and ornate blade designs with various curved blade and hilt styles – pretty reminiscent of those shown in the latest teaser:

A symbol of her royalty, a queen's crest is as much a reward as a responsibility! 👑 pic.twitter.com/ifbNKM7kSv

Further to this, Riot’s also posted a teaser on Twitter of what looks like a broken, golden-hued blade lying in some debris, with the text: “Hurt someone enough, and they just might hurt you back”. Hmm. From what we can see amid the smoke, the blade looks pretty similar to the shape of the blue design in the teaser above, as well as to the one seen in that concept poster shared by Riot in the League September Champion roadmap post here. Hmm.

“Hurt someone enough, and they just might hurt you back.” pic.twitter.com/r3hnklT0aU

It’s far from clear what these signs mean just yet with so little to go on, but it seems likely we can expect at least one of these signs to tie into that upcoming thematic. With League of Legends patch 10.24 now “locked down” and the final patch of the year due to hit the PBE this week, it looks like we’ll find out very soon what these teases mean.