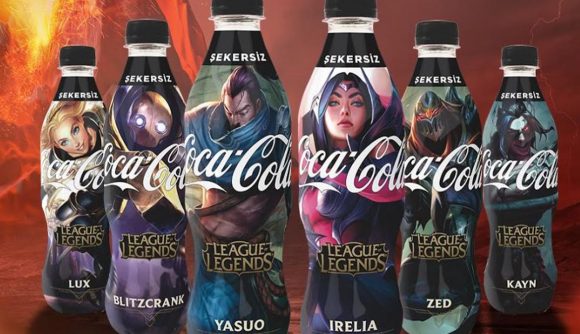 League of Legends lets you buy everything from experience boosts to new champions with real money through Riot Points – or RP – but the typical limits of a close digital economy mean you don’t have many opportunities to get a deal on those points. There’s at least one way to get a substantial discount, though: Coca-Cola in Turkey.

Coke has put out a fresh line of bottles featuring a massive array of League champions. Each bottle comes with a redemption code that unlocks a chest and key worth 200 RP. As Reddit user infest– notes, you can get those bottles for around 1.75 Turkish Liras, which comes out to around .25 EUR or .38 USD depending on the exchange rate of the day.

That’s a fraction of the normal RP costs in every region, even Turkey itself, where 400 RP comes out to 12 Liras. Just exercise caution if you’re looking to import a whole lot of Turkish soda – don’t be surprised if those codes all turn out to be region-locked.

The bottle designs are very cool, at least.

This promotion has been around for at least a few months, and the bottles are available in a variety of Turkish convenience stores and fast food restaurants.