Riot Games has been pouring a lot of love into League of Legends lore over the past decade, and – give or take a couple of retcons – Runeterra is now more fleshed out than ever before. Riot’s MOBA turns ten later this year, and to celebrate, one fan has brought the world of the game to life in exhaustive detail.

Earlier today, Zeyu Ren, lead artist at Tencent Games, posted their homage to the world behind League of Legends. Titled ‘Runeterra’ after the continent on which the game is set, the video, which you can check out further down this article, visits well-known locations from all over League of Legends lore.

Ren’s journey starts in the far north of the Freljord, with a quick cameo from Ashe as she overlooks the snow-covered forests of her icy homeland. Rather than a generic landscape, however, some of Ren’s artwork focuses on specific locations. Their visit to the Freljord, for example, focuses in on the pilgrim site of Rakelskate, while a trip to Bilgewater shows off the iconic Butcher’s Bridge.

The video criss-crosses Runeterra, documenting the cataclysmic destruction of the Shadow Isles, the mysterious jungle city of Ixoacan, to the gleaming Shuriman Sun Disk. My personal favourite location, however, is the towering Mount Targon, which stretches and almost incomprehensible height beyond its neighbouring peaks. 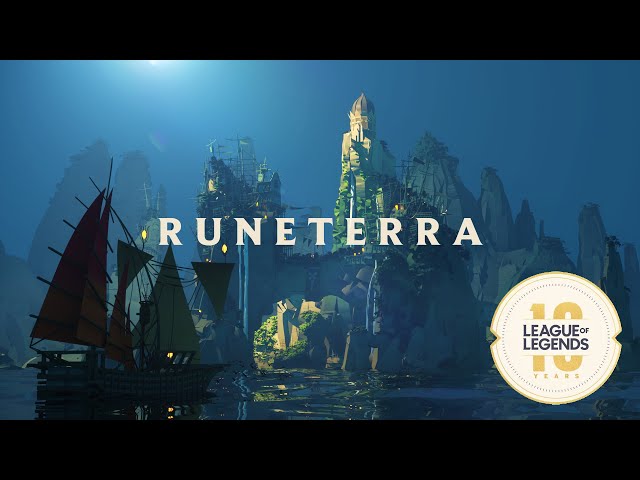 It’s a sometimes simplistic style, but Ren’s definitely managed to capture the character of some of less well-explored areas of the world. Demacia and Noxus are well-known, but places like Zaun and Piltover are rarely explored, and Ixoacan has only recently made its way into the game.

And while Ren’s version of Runeterra might not go into quite the same detail as Rit’s official offerings, their take is even more impressive when you consider that it was all made in virtual reality. In a comment accompanying the video, the artist said that they “built everything in VR using Quill,” a painting software that lets you create 3D models and animations.