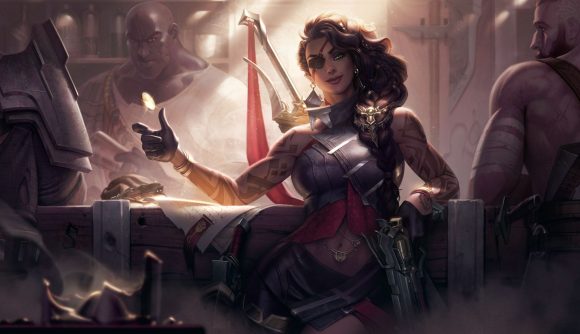 If you’ve been keeping up with our League of Legends patch notes, you’ll have noticed the multiplayer game’s most recent gameplay update brought a pretty hearty batch of balance changes for Samira, the Desert Rose. Tweaking aspects across her ability roster, League of Legends patch 11.4 hit the champ pretty hard with some nerfs – but now Riot Games is dialling some of these back as it seems they were a little too effective.

Gameplay design director Mark Yetter has posted the preview for League of Legends patch 11.5 – which drops next week – on Twitter. The dev notes that the marksman champ has been added to the coming update’s buffs list, explaining that she was “a bit over-nerfed”. While the changes listed for 11.5 only tweak two things – Samira’s attack damage dished out per level and the damage she deals with her Q, Flair – they looks set to pull back on the changes made in the last update.

11.4 brought key changes across all of the champ’s abilities which it seems has led to her becoming a bit “over-nerfed”. For example, her passive’s attack damage, which dropped to just 3.5% (from 7.5% previously), and the attack damage ratio of her Q, which became a flat 100% where it was between 80-110% previously.

11.5 Patch preview with the full changes. Not 100% final but we're getting close.

Samira (a bit overnerfed) and Qiyana added to the buff list as well. pic.twitter.com/RJjQsNTW1e

Assassin champ Qiyana additionally gets some buffs in next week’s patch, as Yetter has highlighted, though plenty other League of Legends champions – Pyke, Karma, Trundle, Master Yi, Sejuani, and more – are also marked out for some boosts, too. Check out our League of Legends patch 11.5 notes linked above for the full rundown of what’s getting tested right now ahead of the patch’s arrival soon.