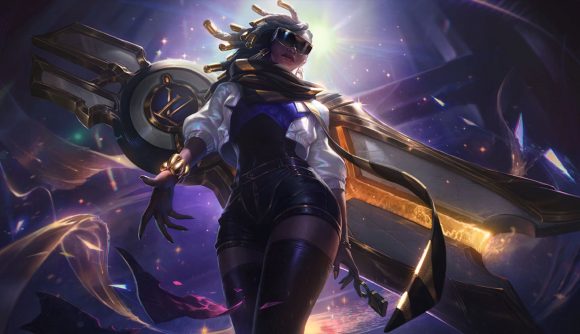 Just last week, Riot Games announced that League of Legends champion Senna would be getting some key changes adjusting how she plays in a support role soon. The MOBA game’s devs revealed they were working to move the support-marksman champ’s mythic builds “away from Frostfire Gauntlet into more on-fantasy items (like potentially Lethality or AP)”. Now, we’ve got an idea of what those changes look like as they’ve come to the Public Beta Environment.

As detailed in our League of Legends patch 11.11 notes, the latest PBE update has brought changes that reach across almost all of Senna’s abilities. While they’re likely not in their final form – the tweaks are up for a round of testing, after all – they give us a good idea of how Riot’s shifting support Senna away from her dominant Frostfire build in the current meta, and that starts with her stats. The studio’s beefed up her HP per level to 82 (up from 75), which means she could be less reliant on the item’s health-giving effects in support.

Senna’s passive ability Absolution, meanwhile, is seeing its additional attack range given for every 20 souls the champ stacks dialled down to 20 (from 25 previously), which should help address the champ’s dominant tankiness of late.

Senna’s Q, Piercing Darkness, also gets some changes, with its restore effect now including a lethality ratio of 160%, while her E, Curse of the Black Mist’s, move speed getting an ability power ratio of 0.05%. Lastly, Senna’s R, Dawning Shadow, is getting buffed, driving its ability power up from 50 to 70.

As always, we can't promise anything will ship, but happy to hear feedback. (2/2)

Additionally, though, alongside these changes are adjustments to some of the game’s items to re-steer options for Senna, as you’d expect. For example, our old friend Frostfire Gauntlet has had its passive effect cooldown for ranged champs nerfed to six seconds, where it was four before. Safe to say, that’s a change with Senna in its sights. But, we can also expect some epic and legendary items to get some changes this coming patch, too, including Frozen Heart, Watchful Wardstone, Randuin’s Omen, Stirring Wardstone, and more.

For the full details, head to the patch notes linked above, and be sure to keep an eye on the live game on May 26 as that’s when patch 11.11 – and the above (tentative) changes – are due to drop.