The two-time champs almost made the perfect championship run, having not dropped a single game since the tournament began at the group stages in Paris. KOO Tigers, who were written off early in the running as the weakest of the Korean competitors, can take solace in having at least drawn blood in their battle with the gods.

The crowd in Berlin’s Mercedes-Benz Arena threw themselves behind the underdogs, and chants of KOO’s name filled the stadium during their brief fightback in game 3 after pre-match VTs revealed players’ only wish was to hear fans cheer for them – and to at least do some damage to SKT’s kill-death ratio.

They achieved both aims, with a storming comeback to make it 2-1 before the 2013 champions regained their composure for a clinical finish in game 4. After the match, SKT’s top-laner Gyeon-Hwan “MaRin” Jang said: “I think KOO were able to take advantage of our mistakes in the early game. In the first game they tried too hard to push that, and that’s why they failed, but in the other games they did well to make good on our mistakes.” 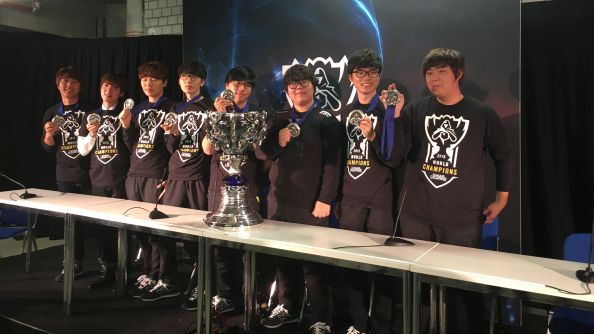 Yesterday, MaRin seemed convinced that KOO’s early game would be their weak point, however they also considered jungler Ho-jin “hojin” Lee to be a weak link in KOO’s defense and this proved to be a fatal mistake too. Going 7/1/18 in game 3, and at one point holding a 7/0/7 streak, hojin stepped up to make KOO’s mark in an otherwise flawlessly dominating tournament for SKT.

Speaking of that blip in their perfect record, SKT’s superstar centre Sang-hyeok “Faker” Lee said: “I feel really happy that SKT have been the first to win WC twice, but a little disappointed that we didn’t manage it without losing a single game.”

For the 19-year-old, the real struggle begins now however, as SKT enter into a new year as defending champions, something the team does not have the best record of. “After I won worlds back in 2013, I was not able to make it to Worlds immediately after,” Faker said. “And I think that shows how difficult it is to stay at the top. And so to stay there, we’re going to have to work very hard.

“Winning worlds twice right now is definitely an achievement, but it’s one that will be broken in the future, so I prefer to think that this is just the beginning of how big eSports is going to become.” 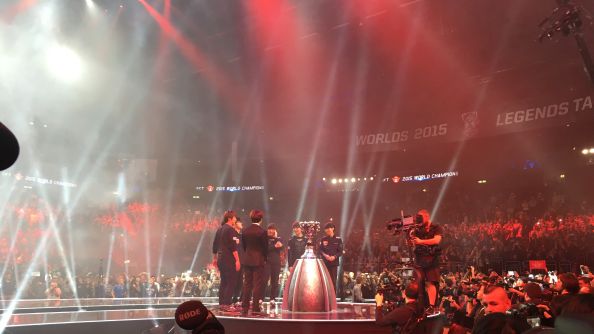 But before that, there’s the less stressful matter of returning home to a heroes’ welcome, and support player Jae-wan “Wolf” Lee couldn’t be happier about that. “It’s been a month since we left Korea and obviously I miss home,” he said. “I’m just looking forward to going back and getting some good Korean food.”

Though Europe’s cuisines may not have sat well with the team, you’d imagine that travelling between Paris, Brussels, London and Berlin might give them a chance to sample some of the continent’s other cultural heritage, but apparently e-sports is serious business.

The team’s AD Carry, Jun-sik “Bang” Bae said: “Ever since coming to Europe, we have only been in practice rooms and the venue so we don’t actually know what the difference is between Europe and home.”