League of Legends patch 9.18 has just dropped, and with it come a new selection of Star Guardian skins. But what would Riot’s most anime outing be without an actual anime to accompany it?

Thankfully, we need never ponder that question, as to accompany the arrival of the new patch, a new animated trailer has arrived. But while 2016’s Burning Bright and 2017’s A New Horizon both leaned towards the anime-intro style of trailer, this year’s video, Light and Shadow, is a very different offering.

It’s a very in medias res video, beginning with Neeko scurrying around a mysterious, ruined temple. The cause of her scurrying is Xayah, who unleashes a whole load of feathers in an attempt to bring the Curious Chameleon to bear. It’s a beautifully-animated sequence, even by Riot’s recent high standards. Sadly for Neeko, there’s not much time to enjoy the scenery, as her attempts to fight back are somewhat thwarted by the arrival of Xayah’s overly amorous companion, Rakan.

From there, however, there’s some interesting trickery, as Neeko gives the pair the slip by temporarily transforming into Xayah and fleeing upstairs. But her attempt to escape is undone by Zoe, who teleports all four back to square one, leading Neeko to pop her ult, giving way to one of LoL lore’s trippiest animated sequences ever. 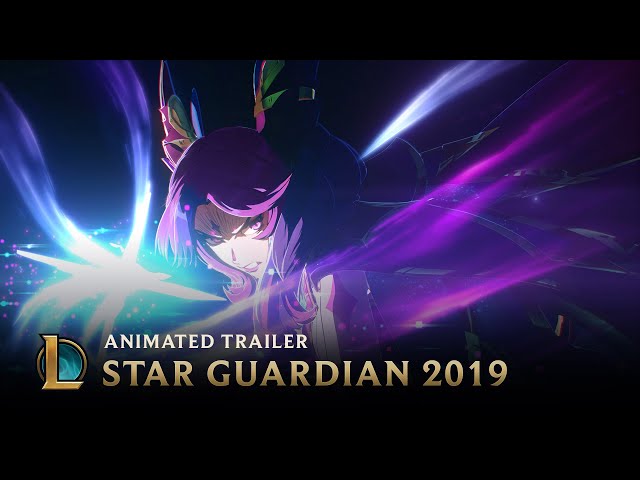 Everything seems to come to a head as the video draws to its end, but before Zoe (who is apparently an evil Star Guardian, if that wasn’t clear) can corrupt Neeko, Star Guardian Ahri appears, holding the same three baubles that she cradled in the last Star Guardian video, back in September 2017. Given that Xayah and Rakan were fresh to the Rift back then, and Zoe and Neeko were months, if not years, away from release, that’s an impressive thread for Riot to have picked back up, and makes me wonder if there’s more to the Star Guardians than just a cosmetic line.

Either way, the new skins will be available from tomorrow. If you want to keep up with the game, check out the League of Legends patch 9.19 notes as we head towards Worlds 2019.