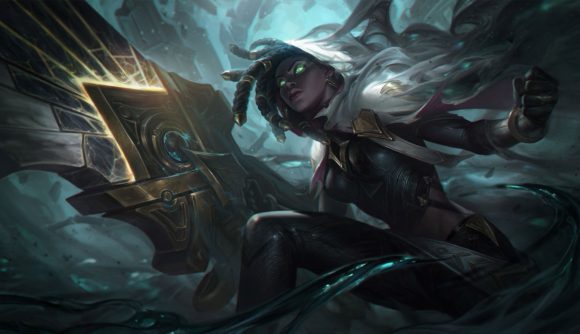 League of Legends patch 11.11 is on the way in two weeks, and with it Riot Games is looking to make some changes to Senna in a support role. One of the MOBA game’s devs has revealed that studio is working on shifting the champion away from her tanky Frostfire Gauntlet support build to one more aimed towards “on-fantasy items”.

Lead game designer on the multiplayer game’s Summoner’s Rift team, Jeevun Sidhu, has posted news about the devs’ plans on Twitter. “For the 11.11 patch, Summoner’s Rift team is working on moving support Senna’s mythic builds away from Frostfire Gauntlet into more on-fantasy items (like potentially Lethality or AP),” Sidhu explains. These changes should help to tackle Senna’s dominance in a support role of late, which it seems stems from the sheer range of option she’s got at her disposal.

Combined with her abilities – that is, her power to keep on scaling up the damage she deals and stacking souls – and Grasp of the Undying rune, the Frostfire Gauntlet in Senna’s hands empowers her to do a whole lot of damage. It looks like Riot’s looking to dial this highly effective combo down a tad, while opening up other options for other mythic builds next update.

As for what form these changes will take, exactly, isn’t clear just yet. League of Legends patch 11.11 has only just hit the PBE for its fortnight of testing, and Senna’s balance changes haven’t showed up on the testing grounds as yet – but, we should hopefully get an idea in the coming days, so do keep checking back on our patch notes (linked above) to find out.

As always, we can't promise anything will ship, but happy to hear feedback. (2/2)

Additionally, Sidhu says in a follow-up tweet that the team is “also looking at making more competitive options for top lane tanks’ second item beyond Thornmail – mostly looking at Warden’s Mail/Frozen Heart and Warmog’s here”. So, looks like we can expect to see some tweaks that should open up more options for top lane builds drop soon, too. As the dev notes, there’s no guarantee these will ship, but says that the team’s happy to hear feedback from players.