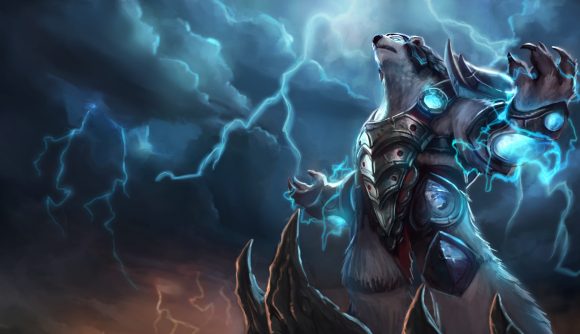 As the games industry continues to adapt to the ongoing COVID-19 outbreak around the world, it seems devs currently remote working are finding ways to stay engaged with their games’ communities – and share a little fun, too. League of Legends senior Champion designer August Browning has posted a funny new idea for the upcoming Volibear rework – and it’s not quite what you’d expect.

As you might be aware, Juggernaut LoL Champ Volibear is due for a rework sometime this year, following the Fiddlesticks rework, which is now up on the MOBA game’s PBE for testing with LoL patch 10.7. While it’s expected the update will, like Fiddlesticks’, overhaul all of the Champion’s abilities, skins, and perhaps even his VO, Browning has posted an alternative ‘version’ – as Annie’s teddy bear Tibbers.

“Day 2 of working from home. This is the rework Volibear needs,” the dev says, with a clip of Volibear’s all-new role in-game. Take a look below – there’s Annie summoning her trusty teddy Tibbers, and out pops the armour-clad Thunder’s Roar. It’s a pretty awesome proposal, even if it doesn’t make it into the live game.

It looks like Champion designer Nathan Lutz is enjoying the idea, too, replying in jest: “Dude! Why would you leak all my hard work like this?”. Browning replies: “S[or]ry buddy, I needed the upvotes.” Well, fair’s fair.

Day 2 of working from home.

This is the rework Volibear needs. pic.twitter.com/5jS3wh2qGy

It’s not the only tweak the designer’s made to one of the game’s Champion reworks this week, either – he’s also tinkered with Wukong to make him transform into vanguard Champ Nautilus when becoming a decoy, too. Take a look below:

Day 1 of Working from Home.

This is the update Wukong needs. pic.twitter.com/cPT8duKdZO

Sadly, it’s not exactly likely either of these ‘reworks’ will make it to live servers, but if you’re a Volibear main you can look forward to “a kind of Eldritch Horror-themed Volibear skin” later in 2020, which Riot will give “to anyone who owns Volibear already or picks him up during his launch patch for free”. After that, it’ll be added to the Champion’s line of regular skins available for purchase. Sweet.

In the meantime, you can take a look at what’s just come to the game in LoL patch 10.6, as well as our our LoL tier list to find out which the best League of Legends Champions to play are right now.

The WHO has information and guidance on the COVID-19 virus on its website, which you can find here, as well as advice for the public on how to stay safe.