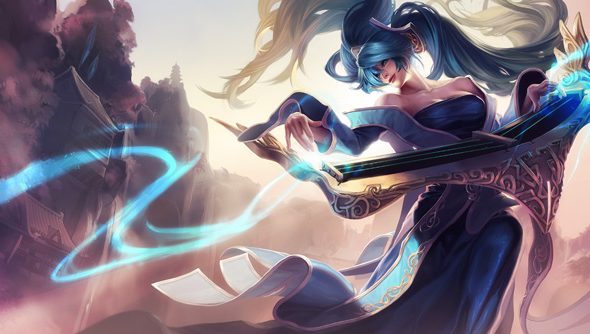 If you’re looking for a D&D point of comparison, blue-mopped Maven of the Strings, Sona, is the bard of League of Legends. Not only because she plucks at a magical zither, but because nobody’s quite sure of the best way to play her.

Nevertheless, she’s the subject of some upcoming nerfs in one of the best free games on PC. Riot explain that Sona is “actually really strong”.

Riot are looking to lower Sona’s sustain overall. In cases where a lot of damage has been taken on both teams, the developers reckon that Sona and her allies recover just a little faster than they should.

But their plans have caused confusion in the LoL community, where Sona is often viewed as already underpowered.

“Our feeling is that Sona’s currently pretty under the radar power wise and is actually really strong at the moment,” explained Riot’s lead champion designer Andrei van Roon.

The new tweaks shouldn’t be taken as indication than Riot’s recent Sona rework has failed, van Roon went on.

“Reworks are done to fix fundamental problems with how a champion plays,” he said. “Power by contrast is adjustable with simpler numbers changes, and isn’t inherently linked with how healthy for the game a champion is.

Hmm! Do any of you lot play Sona, or find her to be a tricky customer in the lanes?

It’s a good time to be playing the world’s biggest PC game. Riot are now rewarding League of Legends players with influence pointsif they can keep up their good behaviour.