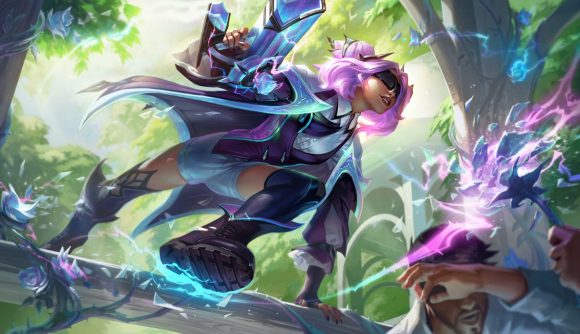 Zeri, the Spark of Zaun, recently joined League of Legends with the MOBA game’s 12.2 patch. Since then, we’ve seen the champion’s Runaan’s Hurricane interaction nerfed, and now a whole bunch of other balance changes have come to the PBE for a round of testing ahead of the next major update’s live debut soon.

As per the League of Legends patch 12.4 notes – which are based on what’s currently on the testing servers – Zeri’s Q ability Burst Fire is in for the most changes. Notably, the base damage her Q deals is being dialled down, though on the upside for Zeri mains the ability’s base damage can now crit, so has the potential to pack an extra punch.

Elsewhere, Burst Fire’s right-click slow effect is getting a slight nerf in both the amount dealt at the lower ranks and its duration, and its uncharged right-click damage has also dropped. However, the slow amount at the maximum rank has been buffed slightly and the uncharged right-click low health multiplier has increased, too.

Zeri’s W, Ultrashock Laser, meanwhile, is due to see its cooldown changed with the upcoming patch, going from a flat ten seconds to a scale of 13 seconds down to nine at the top rank. As of the current PBE build, though, it looks like Riot’s testing out a further change to this ability beyond what the studio’s outlined in its patch preview. It seems the ability’s slow effect is seeing some decreases at lower ranks, though it remains at 70% for the top rank.

12.4 with content is here, some spicy changes for sure.

To note, these are some quicker changes to pull down the support item top meta. I don't expect these to be the last of the changes in the space, but any larger ones need more time to validate. pic.twitter.com/mkuhtHtHVl

Spark Surge, Zeri’s E, is seeing some increases to its cooldown at most tiers and the cooldown reduction per champion hit with an ability or attack has decreased to one second from 1.5 seconds. Zeri’s ultimate, Lightning Crash, is seeing a change that means its attack speed is now a flat 30%.

It’s worth noting that all of these are just tentative changes for now, so it’s not guaranteed that all will hit the live game, or as they are on the PBE. You can check out our full League of Legends patch 12.4 notes if you’re keen to check out all that’s currently being tested for the next big update, which is due to drop on February 16.