Riot is made up of lovely people who like to listen to the community, and the latest change to League of Legends is completely based on player demand. Mirror Mode lets all 10 players play as the same champion in One For All, bringing with it all the chaos you’d expect. 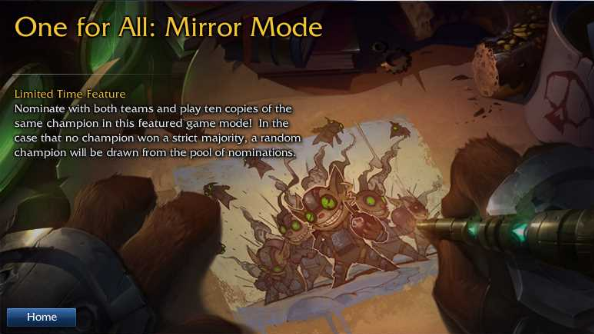 For Mirror Mode, Riot have implemented a new champion select process to help players be assigned the most logically popular champion. If more than 50% of the votes from the 10 players are for a single champion, then that is the character who everyone will play. If votes are more evenly distributed, a weighted random selection is made from the voted champion. “for example, if 4 people vote for Amumu, 3 vote for Annie, 2 vote for Aatrox, and 1 person votes for Alistar, there’s a 40% chance everyone will be Amumu, a 30% chance you’ll all play as Annie, a 20% chance to face off as Aatrox, etc,” explain Riot on the League of Legends blog.

A new microtransaction is also attached to Mirror Mode; a Battle Boost that you can purchase for your whole team during the champion select phase. The boost unlocks every skin for the game’s chosen champion for the duration of the match, as well as granting a single game IP boost.

One For All: Mirror Mode is live and ready to play on the PBE, so hop on over to your League of Legends client to try it out. Five clones of Aatrox charging at another five Aatroxes? Let the fun begin.