Tencent must be pretty chuffed right now. Their latest earnings report for 2013 shows that CrossFire alone, their free-to-play shooter, earned them $957 million. If that wasn’t enough, their other major free-to-play game, League of Legends, earned them another $624 million.

Free-to-play is clearly huge in China. Shows why quite so many developers are eager to tap into the market.

The data comes from SuperData Research. They’ve compiled the top 10 earners in the free-to-play market.

This data is only taken from the Chinese market, hence the entry of World of Warcraft on this list. Blizzard have developed a Chinese only free-to-play release of their usually subscription MMO. 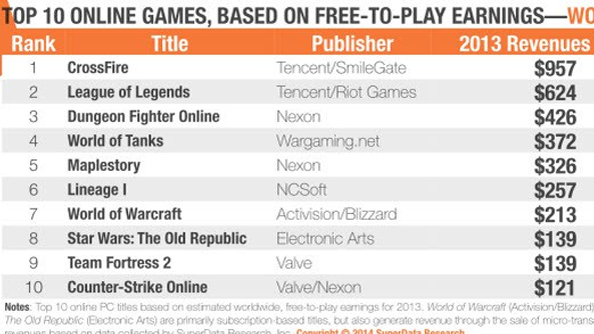 Tencent are far and away in the front when it comes to their earnings. Although Nexon has garnered three entries on the list. Dungeon Fighter Online, Maplestory, and Counter-Strike Online (another Chinese slant on a popular game) are all developed or published by Nexon.

According to SuperData, free-to-play revenue in the US grew from $1.99 billion to $2.89 billion last year. Conversely, subscription games shrank by 19%, earning “just” $1.12 billion.