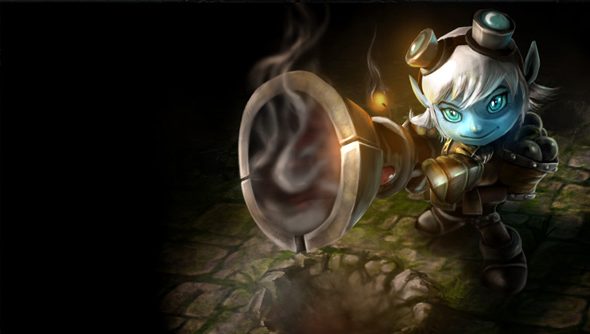 Riot sent their ‘relaunch’ team to PAX this year. These are the men and (one) woman who take apart League of Legends’ creakiest champions and work out what makes them compelling, before wrapping them in new skins and lore and returning them to their public.

The job is endless: by the time they reach the end of the bridge, it’ll be time to start repainting from the beginning. At last count, LoL had 115 champions. There will be more.

The panel of developers were asked: isn’t that total going to get a bit – well – silly?

“The answer to that depends on what problems champion numerics create, right?,” asked lead designer and master of rhetorics Ryan Scott. “A couple which are common are balanceability, learning curve, things like that.”

Scott was clear: there is a number of champions that’s too many. He’s less clear on precisely what number that is.

“If we told you there were 5000 champions, you’d say, ‘Okay, that’s silly’,” he said. “So there’s clearly a number that is too many. We’re not entirely sure when that is yet – it’s when it starts looking like a problem. But the big thing to me is less about the number of champions and more about the way we fix these problems.”

One of those problems – the learning curve – is one Scott believes Riot can go a lot further in tackling, simply by providing “basic information” on new champions. Players frequently take months-long breaks from the game and return to find that the burden of knowledge has increased in their absence – leaving them more-or-less helpless in the face of unfamiliar champions.

“You’re not just going to go and look that stuff up, that’s not realistic,” said Scott. “That’s not a clean experience. So what if we had a way to teach players in real-time what they need to know about what they’re facing? You don’t need to know all the intricacies, but you need to know, ‘Okay, Lucian’s going to use his [ultimate] – it fires in a line and you need to stay out of it’.

“I’d like us to approach the problem from those methods first and see how bad the problem is.”

The balance issue, meanwhile, is “kind of a red herring”.

“The game’s become more balanced as we’ve done more champions,” says Scott. “It’s harder, but we keep growing the team and getting better at it. So TL;DR – there is a number, I don’t think we’re close to it yet. We need to work on other stuff first.”

The expectation of knowledge returning players are lumbered with is one of the key issues S2 have tackled in their new MOBA, Strife. Do you think there’s a balance for Riot to strike between tactical range and accessibility?