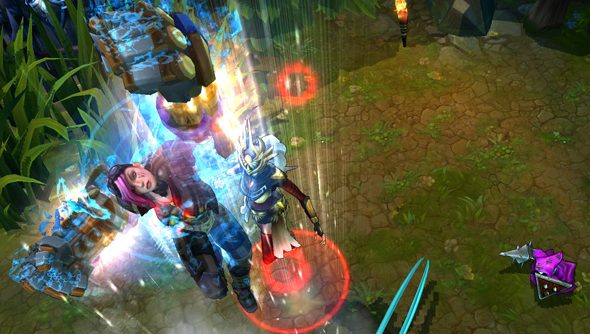 “Here I come to save the day…or wreck it.” Vi’s voiced response to my first click of the mouse is not very reassuring, but the ambiguous middle ground stance it takes is a pretty good summation of the punchiest champion to step onto the fields of justice. If you want to see exactly how Vi keeps rabble-rousers in line, look at her official profile. The TL;DR version: she’s a mecha-human with pink hair, giant fists, and a knack for throwing the beat down in melee range.

Vi doesn’t give off a good first impression. She’s fairly weak in early lane phase and her tough-girl cop attitude has been clichéd to death long before she picked up her piston punchers. Her two early abilities (a leap that knocks back her target and an AoE cone attack) are fun to harass with early in the game, but never felt like they were doing more than that.At best, I was struggling to keep pace with my opponent’s harass, and I never felt like I was controlling the lane and putting pressure on the enemy team to come support my lane opponent.

I do, however, love her animations. They’re snappy and elongated in the finest sense, epitomizing the trademark style Riot Games told me they’re trying to pursue at the world championships last month. She is also fairly hardy, and it was fun to watch people freak out when I landed a fully-charged Q (power up to rush in a direction and deal double damage to the first champion hit) from the bushes and then follow it up with her cone attack and a few auto-attacks to drain their HP pool like an assassin.
That usually only works once, however, as Vi’s Q takes a long time to charge up and is obvious when doing so, making it easy to dodge. Most of the time, I felt like I was treading water with Vi through the early levels. The anime-inspired skin isn’t really my style, but her power fist is awesome.

All of that changes in the second half of the game, however. Once Vi gets a few core items (Iceborn Gauntlets are an absolute must), she really comes into her own. Her biggest asset is her reliability in mid-to-end game teamfights. Even in matches where I got off to a bad start, Vi pulled herself back into the land of the relevant thanks to her strong ability lineup that’s focused on one thing: getting to her target and forcing them to run away or die fighting.
Running away from Vi is a bit too easy until you invest in an item that slows your opponent, but that’s not really a negative against the champion—just something to keep in mind while playing her. Her ultimate is an amazing initiation tool, letting you leap onto a target at range, jump with them into the air, and perform a body slam move as you crash into the ground that would make Hulk Hogan jealous.
It has a long, flashy animation which is normally a bad thing because it begs an enemy to interrupt it and stall out your most powerful skill. But Vi’s ultimate makes her immune to crowd control for its full duration, making it a very reliable way to pin down the squishy for your team to pick apart.
Her other charge ability (Q) has a long charge up as well, but is susceptible to CC and dodging, making it a lot trickier to pull off (and frustrating a lot of the time). There’s a fun nuance in knowing exactly when to use her different initiations and long-range hits because they all have pros and cons. Getting a killing blow with her E, which causes her next auto-attack to deal damage behind the target in a big cone feels really good because it involves precise positioning, good timing, and a victim that mistakenly thinks they’ve escaped the battle with their life. It’s not surprising that there is a pretty equal distribution of “OMG OP” and “QQ UP” posts on the forums as people debate Vi’s usefulness, because she’s both. She plays the first portion of the game on her heels, constantly playing catch up and simply trying to survive. In the mid game, she makes what looks like a crazy OP comeback as she gets a slow, some damage, and a nearly irrepressible ability to single out targets.
But taken as a whole, she’s not too far from the middle-lands, where balance utopia reigns. If anything, she’s probably a little underpowered, with the possibility of performing like she’s overpowered against low-skill players that simply charge in and try to go toe-to-toe with anyone they face. But, that’s the ideal situation for any fighter champ, so Vi certainly isn’t unique in that space.
CC-heavy and tanky champs like Darius and Singed gave me a tough time in top lane, but Vi has an assassin edge to her that I really like. Not many of the fighters have the same mobility, pressure, and all-out aggressive nature that Vi has with her ability set. Hopping over walls with her charge, slowing the target, smashing them to reduce their armor, and then picking them up and body-slamming them to the floor for the kill reminded me of playing assassins like Talon, Shaco, and Kha’Zix And none of them get to do sweet mid-air grapples like this.

If you already own most of the champions and really need a change of pace for your bruiser slot (or really have a thing for pink hair, big fists, and nose piercings), Vi could be worth a pick-up, but her mechanics and performance won’t win over anyone that isn’t immediately hooked by her base concept.
If it isn’t love at first sight, don’t bother giving her a second glance.
If you do buy her, here are a few tips to get you started: