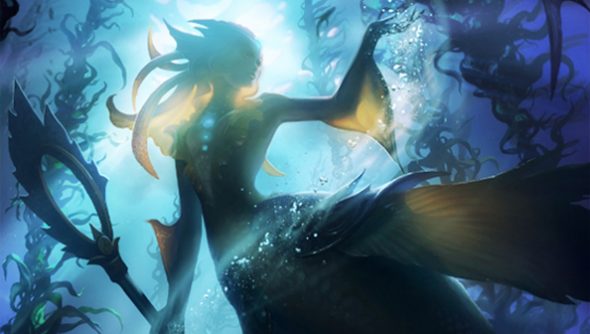 We last set to work parsing Nami a couple of weeks ago, poring over her unique abilities. tl;dr: She calls tides, for the purposes of healing and buffing, and to a lesser extent for slowing and damaging. With her release into the game imminent, Riot have shared a number of strategies you’ll want to heed to part the sea in all the right ways.

Nami has two basic buff spells. The first is Tidecaller’s Blessing, which stacks extra slowing and magic damage on a targeted allied champion’s attacks. Riot’s David “Phreak” Turley advises that players “take a point in Tidecaller’s Blessing early and look to max it after Ebb and Flow”.

Ebb and Flow is a chain attack which heals allies and hurts enemies. The spell hits its target once before passing through up to two others, say Riot.

“Because of this you’ll need to choose between getting two heals by targeting an ally, or damaging twice by targeting an enemy,” says Phreak. “Nami should max Ebb and Flow first when playing in paired lanes, or max second when played as a solo.”

As previously reported, Tidal Wave fires a long range wall of magic damage from Nami’s feet, slowing every enemy in its path with depreciating results. Phreak suggests it should be maxed as soon as possible. Aqua Prison, meanwhile, is a location-targeted magic attack which stuns enemies hit by its bubbles.

All are complemented by the passive Surging Tides, which increases the movement speed of allied champions affected by any of Nami’s abilities. More than anything, the Tidecaller is a team player.

“Nami’s core focuses should be to grant Tidecaller’s Blessing to the main attacker, Ebb and Flow whenever possible, and lead slowed enemies with Aqua Prison,” says Phreak. “When executed perfectly, you can make extremely quick work of your foes.”

See specific strategies and counter-strategies carried out in the full video below from 1:45. Will you be giving some of them a tentative try when Nami arrives?