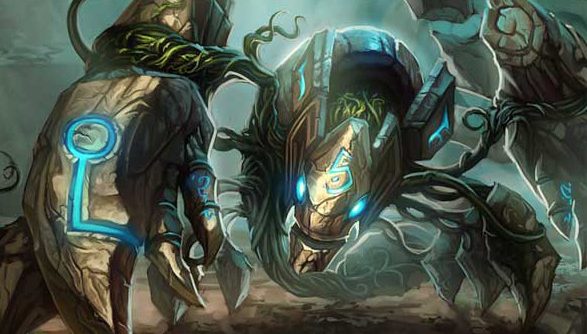 One of the stranger side effects of League of Legends’ industry-cracking success as an eSport is what it’s done to Riot’s development schedule. LoL’s Season 2 championship was the most watched eSport event in history, and now it’s over the developers are upping tools, taking advantage of the relative downtime to roll out some major new changes.

Riot are “really satisfied” with the diversity of their current champions, but aim to tweak LoL’s underlying systems to widen the spectrum of viable tactics further, as well as improve pacing and customisation options. In the process, they’re going to turn the item shop upside down and fundamentally rework how jungling works.

While there’ll be a few tweaks here and there to existing items, significant change will come via a whole range of new items designed to “spark your imagination and reward your ingenuity.”.

“This is the biggest change and, frankly, it’s pretty damn exciting,” said Riot in a news post. “We’re really interested to see what people discover, and we’re confident this will help add some diversity and interesting choice to how you’ll be building your champions in the future.”

Most “old favourites” will sit in their usual places in the item shop, but many have received new or additional upgrade paths and a few too difficult to balance have been removed entirely. Underserved classes like AD Casters will receive new items to complement their role, and Supports will gain a suite of items to help ease the ward burden in long games.

As previously suggested, Riot are examining the role of jungling in LoL with an eye to de-stagnating current strategies in time for Season 3. That means a changed gank flow to scale back junglers’ power during the laning phase of the game, as well as an increase in the number of viable champions for jungling.

Riot’s aim is to improve the metagame and make more champions viable to play, “even in lane”. To that end, Season 3 will also see the addition of jungle-specific items.

Elsewhere, Riot have plans to improve both Masteries and Summoner Spells. The former reportedly aren’t “cool” enough at present, while a number of the latter have been rebalanced. Popular spells like Flash and Ignite will have their cooldowns raised, and weaker skills will be buffed.

So the broom is out, and sweeping changes are being made all round. However, Riot are quick to reassure that “this will be an iterative process”.

“We know that your games are going to play out differently than you’re used to and we’ll be watching like a hawk for any issues that we need to patch. If there’s something that’s really breaking your game experience, we won’t be afraid to hotfix things under extreme circumstances.”

Nevertheless, LoL will inevitably be a different game by the time Season 3 comes around. What do you think about that?