League of Legends champion Karma (sometimes nicknamed the Enlighted One by her friends and family), is being substantially reworked by developer Riot in an overhault that is more than just cosmetic. Though Riot haven’t yet explained exactly how Karma’s stats or playing style will be changed, they say she has been “re-imagined in our eyes as a support-mage” in the vein of champions like Orianna and Lux. In the meantime, they’ve showed off some of their new character art.

Riot shared images of Karma’s new in-game look on the announcment thread on their forums, adding that anyone who had already unlocked her before this reworking will still get to keep the original champion skin. According to the developer, this new look befits her status “as a paragon of Ionia” and ensures she is a unique presence on the battlefield. Senior character artist Grumpy Monkey (aka Joshua Singh) said that, among other things, her posture just wasn’t right. 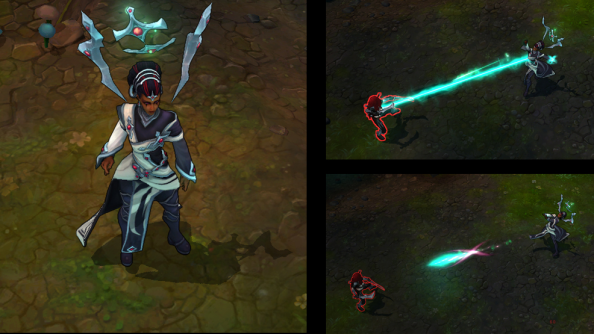 A dev diary is on the way to explain in more depth how Karma’s has changed and Riot will soon provide specifics on both her abilities and her mechanics as a Public Beta Environment release approaches. Meanwhile, you can refresh your knowledge of Karma’s current abilities with the aid of the League of Legends wiki.