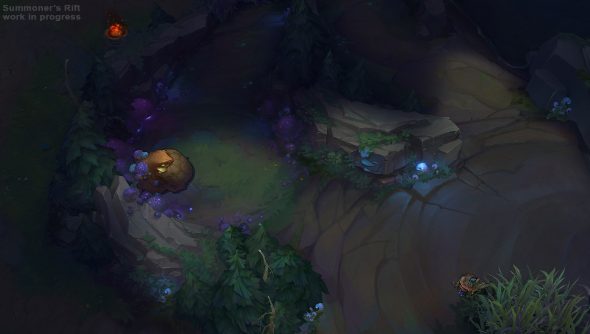 League of Legends’ Summoner’s Rift is getting a big update, changing both how the map looks and plays. As Riot builds up to the big switch, it’s breaking down all of these significant changes.

The new Summoner’s Rift is going to look a lot less busy. Riot reckons that the current map has lots of things that draw the player’s focus. The new design will allow players to be “laser-focused,” says Riot.

“With this update to Summoner’s Rift, we’re controlling color and level of detail, clamping value ranges and reducing character occlusion (so there are less cases where you cannot see your character) — all of which makes for a cleaner gameplay space where critical information pops off the screen.”

Creatures in the Rift are also going to be fiddled with so that they look both visually distinct and able to communicate their threat. So different types of wraith – each with different attacks – will no longer look identical.

Riot’s tried to keep much of the gameplay the same, presumably so as to not throw players off their game. The layout is the same and every jungle camp’s gameplay is meant to be close to its original – even though creatures might have changed.

Navigation bugs, inconsistencies between sides and the camera angle have all been worked on, and Dragon and Baron Nashor have been given new abilities to make the fights more interesting. But other than that, Riot attempted to keep it pretty similar to how it was before.

It’s still a work in progress, but Riot’s going to continue updating the community with more details about the changes to the map. This comes not long after the studio promised better communication and more transparency.