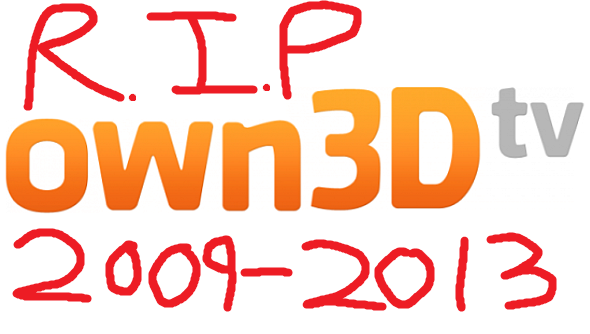 Own3D has formally announced that it will cease all operations and file for bankruptcy by the end of today. The game streaming service was used by some of the most popular streamers around such as Tobiwan and Destiny.

Own3D announced the inevitable news on their blog late last night, “own3D and its management, having evaluated the future of own3D, have decided to cease operations on January 31st, 2013.” they stated. “As the first livestreaming portal for gamers own3D had a turbulent start with unexpected growth. We have tried to drive the company into profitability but due to the capital intensive nature of our industry and increasing competition, we have not been able to reach it despite our best efforts.”

Many partners had already switched to their rivals, Twitch. High profile defections included Destiny, who revealed that that own3D were behind on their payments to him. The situation was so severe that Steven Bonnell could “barely afford food” for his family last year. Here is a copy of the contract Steven signed with own3D which clearly states the agreed methods of payment that were not fulfilled by own3D.

Oleg Kogut, COO of own3D announced on Live On Three (At 1:28:02 in the VOD) that all VODs currently on own3d.tv will be removed indefentality within 24 hours. He urged everyone to back up their VODs asap as they will only be making back ups of the most popular VODs, if any at all. Some reddit users have banded together to save their favorite moments, as seen in this Dota 2 thread.

Are you sad to see own3D go? Let us know in the comments below.