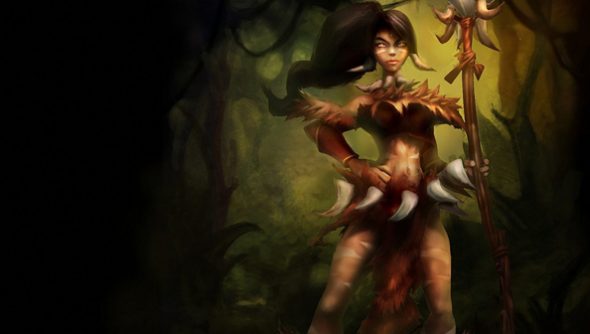 Bestial Huntress Nidalee has been knocking about in League of Legends for three years now, but has a visual upgrade coming in the next patch. Riot have released a Champion Spotlight video for the occasion, in which you can admire her new model, effects and animations, as well as pick up some tips for fielding her.

Nidalee is a hybrid class with both human and cougar forms, playable as long-range mage, short-range assassin, tank or anything else you fancy. She now looks like this:

Nidalee’s passive is Prowl, which has her gain extra movement speed in the brush. Her ultimate is Aspect of the Cougar, learned at level 6 or higher, and allows her to switch between her two forms at will, accessing a different set of three abilities for each.

In human form, the Bestial Huntress can use Javelin Toss, Bushwack, and Primal Surge. Javelin Toss sees a javelin thrown in a straight line, injuring the first hit enemy and causing greater damage with range. Primal Surge, meanwhile, increases the attack speed of a targeted ally for a few seconds. Riot’s David “Phreak” Turley advises putting a point in both early and maxing them between levels 9 and 13.

Bushwhack plants a trap which damages the first enemy to walk over it. Victims take damage and are debuffed for a few seconds. What’s more, they suffer reduced armour and damage resist. Phreak suggests picking the ability up at level 1 for scouting purposes, but letting it take a backseat thereafter.

In cougar form, Nidalee benefits from bonus armour, magic resist and movement speed. The power of Takedown, Pounce and Swipe, Nidalee’s cougar form abilities, is dictated by the level of her ultimate.

Takedown has the next basic attack cause bonus damage, increased when the target is wounded. With Pounce, Nidalee jumps forward a short distance, dealing damage in a small AOE upon landing. Swipe allows her to claw the area in front of her in a sweeping motion, damaging all nearby enemies.

“At the beginning of the game, Nidalee should learn Bushwhack and place them in major choke points,” recommends Phreak.

“In early laning, constantly poke at your opponent, especially in the top lane. Walk into the brush to gain movement speed with Prowl, attack from outside the brush, and then walk back in to disappear from enemy minions.”

Have you experimented with Nidalee before? Now might be the perfect time to feel out a tentative strategy or two.