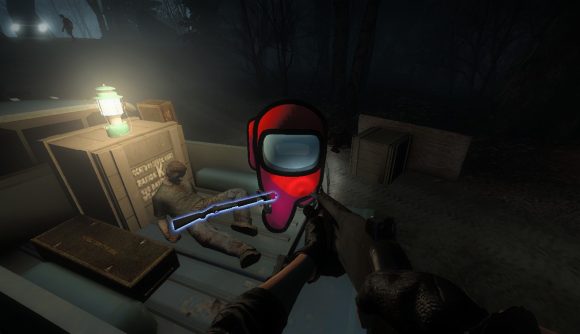 You may have missed the Left 4 Dead 2 craze when it hit 11 years back, but if you were around you’ll likely remember the waves of mods going about. From Shrek and Darth Vader to an assortment of silly sounds – if you could think of it, then it was probably there. Perhaps it’s little surprise that, following the zombie game getting a community-led update, it’s got more mods with more modern inspirations.

Naturally, the most popular games of the moment feature – so it should come as no surprise that one of Among Us’s bean boys has rocked up. Steam user Oguz has added in the social deduction game’s Red character – you know, the best one. They’re playable, too, so you can re-enact all of the gameplay of being an imposter and chopping down zombies. Don’t think there’ll be much scope for just mulling around and doing tasks, though.

Perhaps the most impressive detail is that Red doesn’t have any arms, somewhat like the game. He does still have hands, though – so you can see him pick up guns and the sort. It makes for a Rayman meets Among Us experience.

The mods don’t end there, obviously. Someone else has brought Fall Guys’ jelly beans into the survival game, too. You don’t play as them, though, but try and survive against them and their impending takeover of the world. They’re not six feet tall, though, as canon dictates. So don’t fret.

The old PC game recently got a big expansion thanks to its fans. You can download Left 4 Dead 2’s Last Stand update now and mod it into oblivion. Eh, not the game.