Blinq is a Swiss dating app a bit like Tinder, and they’re currently damaging everyone’s self-esteem with a new Artificial Intelligence robot that guesses your age and attractiveness. Try it out for yourself.

Now, it’s easy enough for me to get ranked and started in the world of online dating, but there are people out there who have a tough time when it comes to finding love. Some call them abominations, but that’s because they’re meanies. So to spread some human kindness, I uploaded photographs of ten of gaming’s most disgusting creatures to prove to them that beauty comes in all forms. 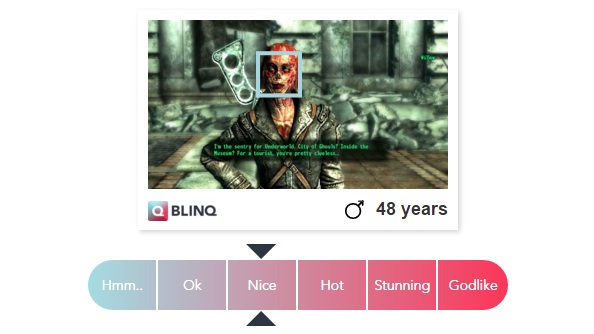 Her skin may be literally peeling away from her irradiated muscles, but this ghoul from Fallout 3 still has some wonderful features. Her slender form meets all Western demands of body image, and those lips are so full no doubt we could easily assemble a queue of willing partners just waiting to steal a kiss. Blinq ranks her as ‘nice’, which perhaps is a bit of a back-handed compliment, but guesses her age at just 48. Not bad for someone who’s survived over 200 years of nuclear holocaust. 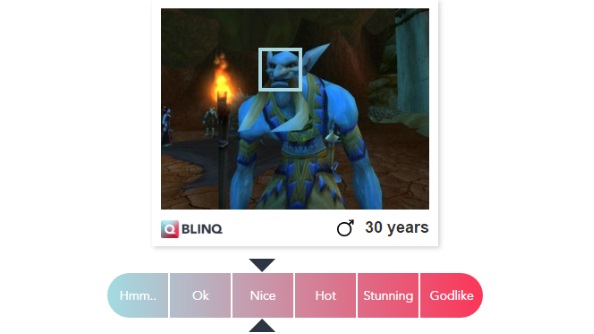 Sure there are those out there that decry blue skin as inferior, but this fine specimen of a troll from the world of Azeroth wears it like the finest fashion. The deep chin, arrow-head nose, and absurd tusks may make it a face only a mother could love, but there are still redeeming features in the baby-smooth surface. And check out those biceps! Blinq ranks this troll as ‘nice’, with an estimated age of a youthful 30. A respectable date by anyone’s standards. 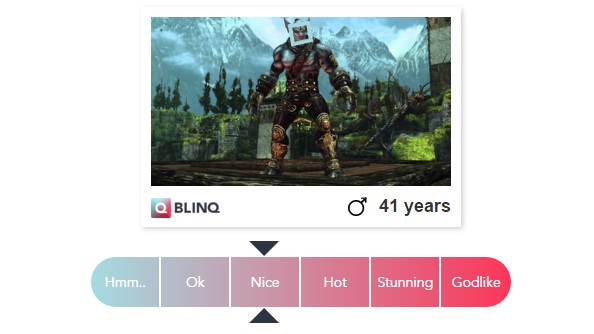 Why this strapping young lad doesn’t score higher than a ‘nice’ is beyond me. Look at those pecs! At 41 years old, he surely should have no self-esteem issues with a body that ripped. The pointed gremlin ears are admittedly a bit of an acquired taste, but certainly nothing a good hat couldn’t hide should they really pose a problem. Dress to impress, and this guy certainly don’t need no shirt. 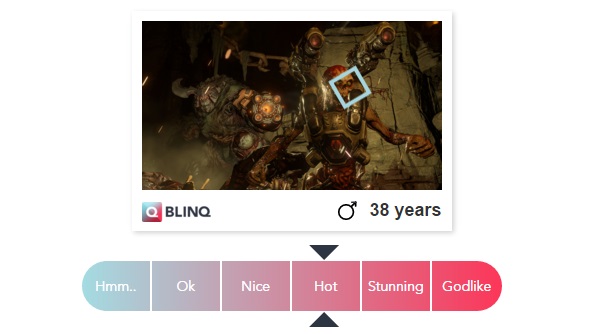 Yes, yes, we normally like our chaps with a bit of muscle, and ideally a face for stubble, but you can’t deny that Doom’s Revenant is a guy you’d want to bring back to meet your parents. Ranked as ‘Hot’ on the Blinq scale, this 38-year-old living skeleton is armed to the (very visible) teeth, and comes with his own eyeballs already in their sockets. 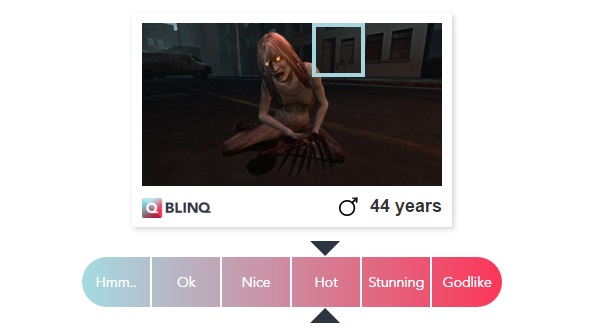 Left 4 Dead’s shrieking Witch is probably someone you want to invite over when your housemates are away for the evening, but there’s no denying she’s a hottie. So hot, infact, that Blinq had to focus its identity square at the wall just over her shoulder. We understand, Blinq: sometimes it’s difficult to look someone so beautiful in the eye. 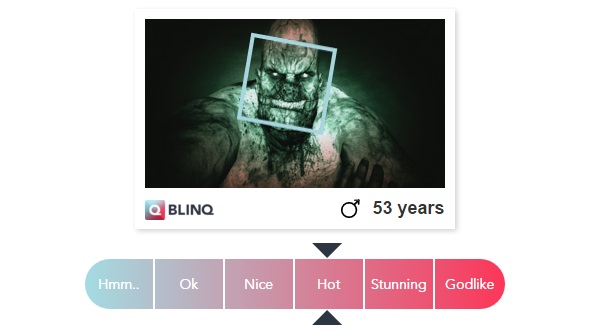 They say a smile is all you need to wear, and Chris Walker has a pearly set of gnashers all his own, even if he’s starting to get on a bit in years. Blinq knows he’s a hottie thanks to that strong jawline, but that’s not his only strength. If you’re into being lifted high, Walker is able to hoist you with just one arm. Swoon. 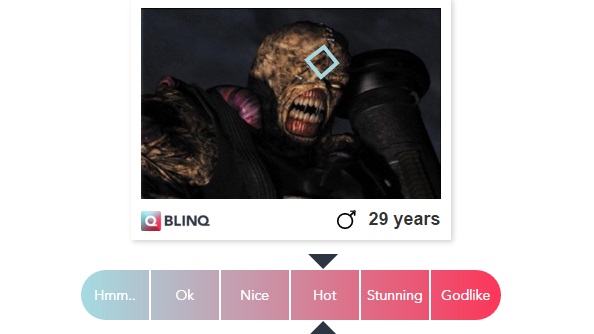 One of our more youthful candidates at 29 years old, Nemesis is one of Umbrella Corporation’s most impressive works. Not actually designed to be a Hollywood Hunk, we believe it’s actually his true calling. We thought it was all down to how well his tight skinwork shows off his smile, but according to Blinq it’s all in the composition of his forehead. That stitching work is impeccable. 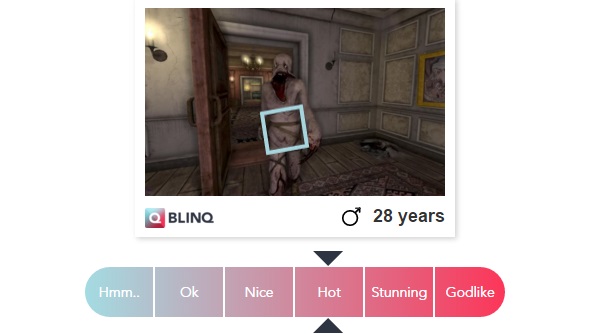 Personally I’m won over by faces: it’s all in the eyes and smile. For others it’s all about the body. If that’s you, it’s my pleasure to introduce you to Amnesia’s Servant Grunt. As you can see on his Blinq picture, the AI went straight in for those abs. There’s nothing here to detract away from that ‘Hot’ rating, and at a youthful 28 years, he’s got plenty of steamy dating time ahead of him. 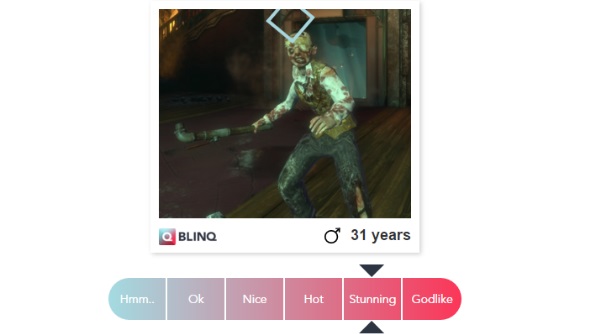 And here we are, meeting some of the most gorgeous abominations in games. And it’s no wonder our number two comes from Bioshock: with that classic fashion sense, who could resist? This thuggish splicer, like Chris Walker, knows the power of a good cheeky grin, and that perpetual wink he wears is no doubt a real winner with the ladies. It’s no wonder Blinq rates him as ‘Stunning’ on their attractive meter. 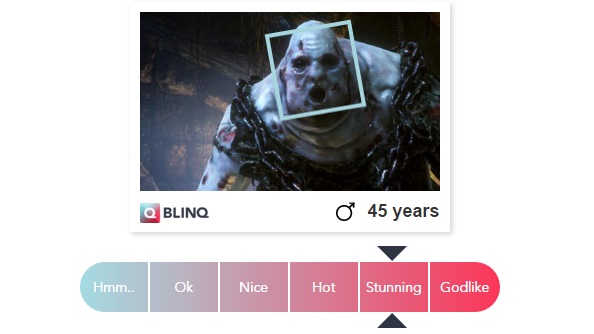 Our Hottest Abomination in Games award goes to someone we never had any doubts about. Indeed part of his allure is he’s unavailable: as a Bloodborne character, this gorgeous creature isn’t on PC. But gosh, just imagine if he were. That super-smooth skin. Those lips, poised for the most intense French kiss you’ve ever had. Deep, soulful eyes you could get lost in. You’d never guess he was a mature 45.

Ranked as ‘stunning’, it was a tie with Bioshock’s splicer according to Blinq. But while waistcoats and pinstripe trousers are very gentlemanly, we can’t help but be tantalised by the Watcher’s chains. We know exactly where they could prove useful.

That’s our pick of the sexiest beasties in games. But do you have the hots for someone else? Tell us what your bae scored on Blinq in the comments.