Plonk me down in the middle of a digital dungeon – one hand resting on the keyboard, the other poised, gripping a pencil, waiting to turn sheets of graph paper into elaborate maps – and there’s a good chance that nothing but a fire would divert my attention. Few opportunities for that sort of dungeon-crawling grace our PCs now, which is why Legend of Grimrock 2 is something to be treasured.

That, and because it’s simply excellent. So I’ve been playing it. And through the wonders of video, you can watch my earliest, pitiful, attempt to brave the dangers of a dungeon that is also an entire island. Take a gander below.

If Legend of Grimrock 2 had a smell, it would probably smell like a bookshop. Not the sanitised, coffee serving, sofa-filled shops found in every high street and shopping centre the length and breadth of the country, but the type of bookshop that mostly exists in our imaginations and in romanticised fiction. It probably smells like the shop where Bastian found the Neverending Story.

A bit old, maybe a bit weird, but rich, too. The scent of adventures inked in dusty books. Covers waiting to be cracked open, their secrets spilling out.

Bloody hell, I’m making it sound old and antiquated. I’m the old man from the Werther’s Original advert. “Come here, sonny. Please listen to my demented stories off the war. I’ll give you a really boring sweet.”

It’s not an antiquated game, though its design does hark back to much older quests through dungeons. Approaching Legend of Grimrock 2 requires liberal application of oil, easing up one’s mental joints. Travelling across a grid from the first-person perspective, jumping between real-time battles with grisly monsters and devious, often fatal, puzzles, remembering that you’re controlling four different characters – getting used to these things again takes time. 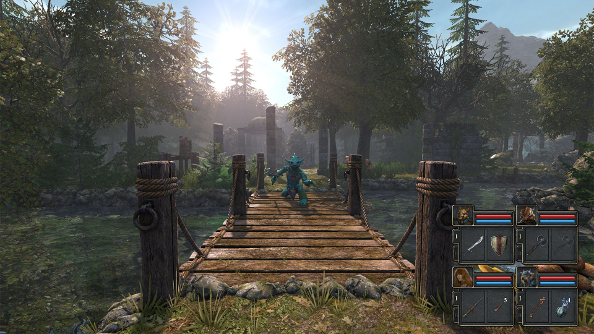 Perhaps this is why the game starts off with a leisurely stroll down a beach, a few small fights and light, logical puzzles, culminating in a short but sweet dungeon. It’s lovely. But then! Death and big plant monsters and embarrassment. It’s not hard to get out of your depth, especially if one party member is a rat with a gun that doesn’t work. Or if you’re just a bit rubbish, like me.

Like Lands of Lore, Grimrock feels like one giant maze, indoors and out; a sprawling network of straight lines and sharp angles that goes off in all directions. And it’s an open maze, where heroes can go with their gut.

If an obstacle seems insurmountable, chances are there are other paths that can be taken, ones with new adventures or even the key to the obstacle. Of course, there’s an equally good chance that any one of those paths will lead to a hideous, weapon stealing monster, a very fatal hidden trap or another puzzle that will send you off gallivanting in the other direction.

Despite its obvious links to CRPGs of the early ‘90s, Grimrock has the benefit of modernity. It’s gorgeous, diverse and massive, and the horde of hungry monsters are a dash cleverer. They’re an animated bunch too, the monsters, sometimes leaping or charging into combat rather than just plodding forward. Well, the undead still plod.

It’s very good. Maybe you should play it.

That said, I’ll never forgive it for making me kill so many turtles.