At some point in the past two years, someone senior at Riot Games woke up with a start, cold sweat beading on their pale skin. Their spouse, concerned for their well-being, laid a hand on their shoulder. “What’s wrong, my love?” they asked. The sweaty executive turned to their beloved spouse. “We only have one videogame,” they said in a tone of soft horror. Shortly afterwards, Teamfight Tactics was released.

Riot’s efforts to be more than just the League of Legends guy continue with the announcement of Legends of Runeterra, the company’s foray into the world of digital collectible card games. We visited Riot Games’ studio in Dublin to try it out.

Hearthstone aficionados will find plenty of familiar features – the visual style, unique animations, and voice clips are reminiscent of Blizzard’s CCG. Like Magic: The Gathering and Hearthstone, the flow of the game is based on summoning creatures and playing spells, with the aim of reducing your opponent’s life to zero. Decks are built around Champions – familiar characters from League of Legends that appear as unique, powerful cards and tend to dictate their deck’s main strategy.

Zed, for example, summons living shadows when attacking, and bounces cards back and forth between the field and the hand. Teemo, the adorable (and highly merchandisable) panda, fills an opponent’s deck with poisonous mushroom traps. 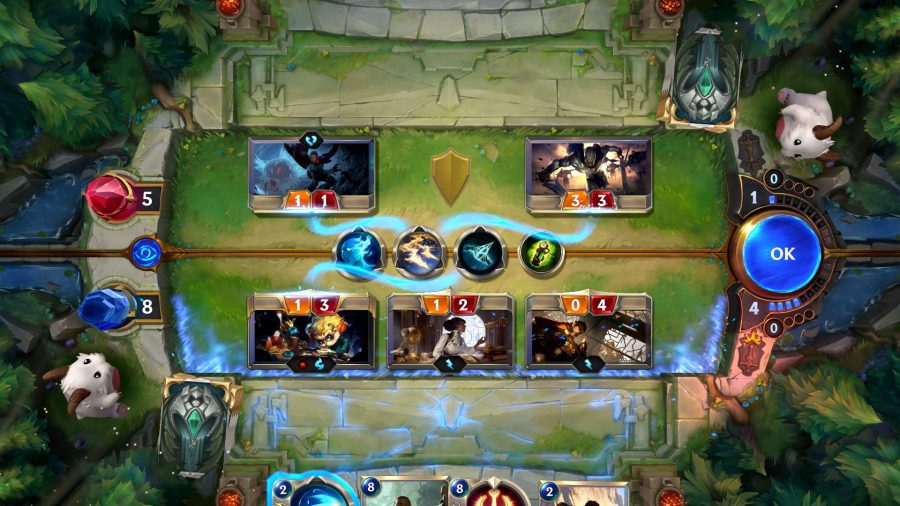 The card library will be divided into six Regions based on the various factions that populate the LoL world. “We’ll introduce big updates every four months or so, with new Champions, cards and Regions,” explains Blake Midstokke, the gameplay initiative lead on the project. “We’ll make sure to build up the existing regions as well.”

Hearthstone is a great chillout game. We wanted something more intense

Where Legends of Runeterra stands out from other prominent CCGs is in turn structure, and the mechanical implications that stem from it. Unlike games like Hearthstone and Magic: The Gathering, where players take it in turns to summon creatures, play spells, and attack, LoR is back-and-forth. Whenever you play a card, the other player has an opportunity to play a card of their own. Who can attack and who will defend rotates each turn. 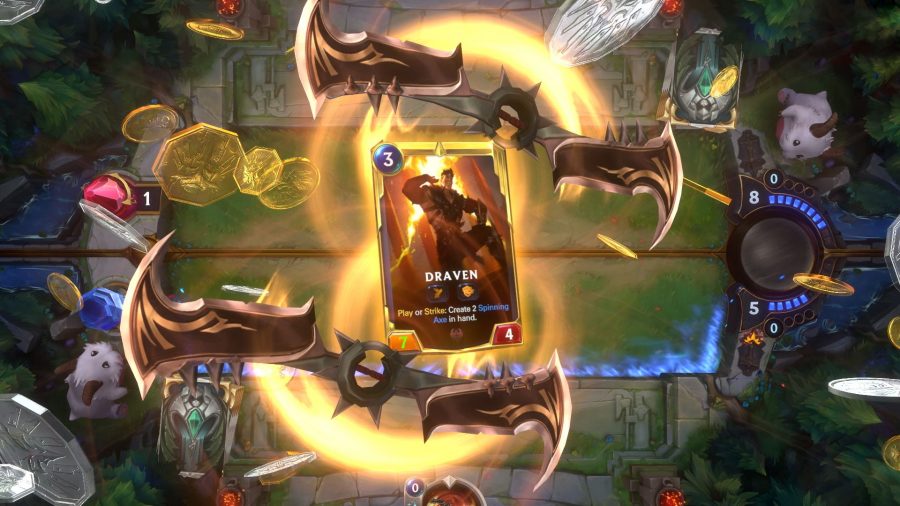 This structure gives the game a conversational feel, with plays being immediately countered or responded to. It also adds another layer of tactical complexity; while in Magic it’s almost always worth summoning a new creature if you can afford it, doing so in LoR gives your opponent a chance to summon one of their own, or shut down your tactics with a well-placed spell card. “Hearthstone is a great chillout game,” design director Andrew Yip says. “We wanted a more intense, focused experience for Legends of Runeterra”.

Riot is vocal about approaching this project differently than others; the studio wants it to grow organically. “We don’t want to tell players what they want, or how they feel about the game,” Yip says. “We could celebrate and focus on competitive play, we could bring the game more to a single-player, casual experience.” This is certainly a savvy strategy. The games industry is awash with failure stories from developers who were too rigid in their approach, or were unable to square their vision for a game with how their audience perceived it.

Riot has the same approach in mind when it comes to the competitive meta. “[We’ll] listen to player feedback, collect data, and respond quickly,” Midstokke says. “Along with the big updates, we’ll be releasing monthly balances.”

Although the popularity of digital CCGs decidedly peaked some time ago, there’s certainly still room for a new competitor in this sphere, particularly one that offers a unique experience. Despite the aesthetic similarities with Hearthstone, during our time with it in Dublin Legends of Runeterra showed clear signs of distinction compared to its forerunners.