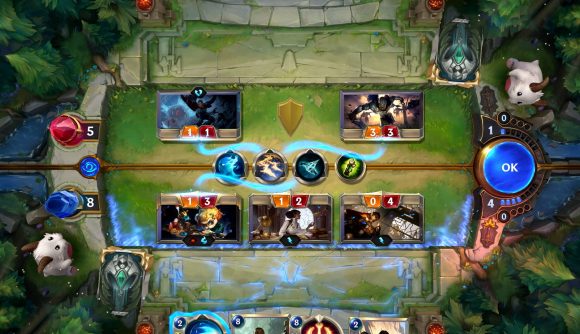 Legends of Runeterra has been out for a month now, and the gaming public has only started getting to know Riot’s take on the card battler. Now, the developer has revealed what it has planned for Runeterra, with a roadmap covering the next few months. Between now and July, Legends of Runeterra will be adding limited-time modes, experimental features, and special events to its suite of play formats.

First up is gauntlets, which arrive June 26. Gauntlets are competitive modes that are only active for a limited time, and they feature unique rulesets to shake up the flow of the game. Your goal in any given gauntlet will be to string together seven wins, and there are unique prizes to earn if you can survive. While the first gauntlet will feature standard deck-building rules, Riot says the second will change things up by only allowing one copy of any card in each deck.

Labs are experimental game modes due to arrive in Legends of Runeterra July 8. These bouts will feature “more extreme” changes to Runeterra’s core gameplay rules, and as such will be a more casual setting – the idea being to be a bit of a mad scientist with your decks and try out strategies you might not otherwise consider.

“You never know what you’re going to get with a lab,” Riot’s community managers explain. “If there’s a lab you really love, it can make a return someday.”

July will also mark the beginning of Runeterra’s first themed event. During the month-long event, you’ll be able to take on a selection of specially-tuned quests, gauntlets, and labs that will earn you unique cosmetic items.

“During an event, every player will have access to a series of limited-time rewards that can be unlocked just by playing,” Riot explains. Events will also feature purchasable event passes that allow you to unlock more rewards – it seems like this is Runeterra’s approach to the battle pass system.

Riot also says it plans on releasing the next region and its associated champions and cards in August. That’ll be followed by new waves of cards for that new region in October and December. New regions will debut every six months, with supporting card and champion sets for the new region two and four months later.

Through the rest of 2020, Riot says it plans to add additional features to Runeterra, including:

Planned but not yet scheduled are features like a tournament mode and a single-player experience, but Riot says it isn’t ready to share any details about those just yet.