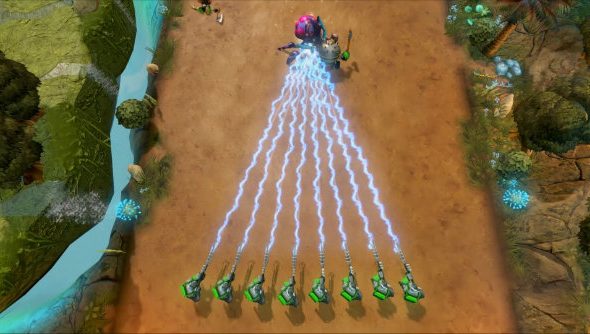 A Kickstarter has been launched for the successor to popular Warcraft 3 mod Legion TD, a mod that inspired StarCraft II’s Squadron TD and Dota 2’s Legion TD: Reborn.

Legion TD 2 will be free, but while you’re waiting why not work through our list of the current best free-to-play PC games.

This standalone version of the competitive tower defence game comes from the two-man team behind the original mod, so they certainly know what they need to do to build upon their original creation. It looks like an interesting twist on the genre.

“Instead of constructing buildings, you deploy and upgrade dynamic fighters that come to life,” explains the blurb. “Rather than beat the stage or solve the puzzle once, you coordinate with teammates to defeat intelligently-adapting opponents.”

“You’ve got to think ahead. Which fighters should you deploy? How should you position them?” Your choices determine how your fighters engage and maneuver in battle,” adds Brent ‘Lisk’ Batas, lead designer of LTD2. “This is our opportunity to put the strategy back into real time strategy games, which we feel have become more about muscle memory and less about smart decision-making.”

At the time of writing, the Kickstarter for LTD2 has raised$32,849 of its $50,000 goal and still has 29 days to go. The best friend developer duo plan to release LTD2 for free on Steam once it’s completed, but they insist “It’s free-to-play, but not pay-to-win.”

The closed beta will launch later this year with four playable races and over 50 different fighters. It will run for a minimum of six months before it is opened to the public, and then the developers plan to keep supporting and tweaking the game “for years to come”.

You can vote for LTD2 on Steam Greenlight, or even pledge to the Kickstarter, if the first competetitive tower defence game on PC sounds like your sort of thing.