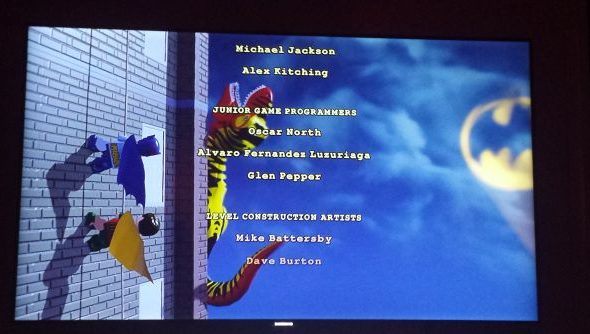 LEGO Batman 3 has been out for a day. That’s physically enough time to squeeze in the 14 hours required to play the thing, so of course somebody has done it.

At the end of LEGO Batman 3, there’s a fun credit sequence in which LEGO Adam West and LEGO Burt Ward scale an endless building. They’re subject to a long stream of gags and cameos – one of which has got tongues speculatively wagging about a tie-in Jurassic Park game.

You can watch the moment for yourself at 26:35 in this Let’s Play.

The screen shakes, and the hatches placed at regular intervals along the building rattle. And then, the Carnivore Formerly Known As T-Rex leans backwards around the wall and offers a roar.

“I just can’t seem to get a break today!”, exclaims West.

And no, popping the phrase into Google doesn’t turn up any Jurassic Park quotes. But according to Brickfan, the familiar strains of the film’s theme kick in just as the tyrannosaurus rolls lazily into shot.

Those of you who visit the multiplex often will know that Jurassic World is due out next year – and LEGO have already confirmed they’ll be producing sets to match. A tie-in Traveller’s Tales game isn’t totally beyond imagining, given their long history of LEGO tie-ins.

The last Jurassic Park game of note was Telltale’s adventure series – notable because it wasn’t much cop. And in the ‘90s, of course, there was Trespasser. Have you had any memorable encounters with extinct beasties sat at your PC?