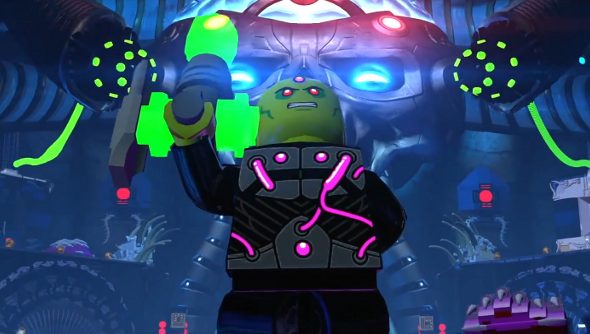 Classic Superman villain and intergalactic arsehole Brainiac is the big bad in Lego Batman 3: Beyond Gotham – which at this point really should just be Lego DC – so it’s only fair he get a trailer introducing his particular brand of Galactic domination.

It’s bottles, by the way. That’s his thing. He likes putting cities in them, most notably the Kryptonian city of Kandor. But now he’s getting greedy and he wants to put worlds in bottles. It all probably started with putting ships in bottles, but then his hobby took a dark turn.

And it looks like, due to a bunch of the game taking place in space, the various Lantern Corps will be making an appearance as well. Is it too much to hope that we can play as one of the wee Guardians? Those space smurfs are just grand.

I’m still working away on Lego Marvel Super Heroes – it’s pretty big – but hopefully I’ll be ready to switch over to DC when Lego Batman 3 launches this autumn.