While some of us are happy using Denmark’s most famous choking hazard simply for constructing tiny replica firearms or recreating our favourite movies on our desks at great personal expense, there are those out there who go that extra mile with Lego. People like Total Geekdom, who have gone and built a high end gaming PC with a bespoke form factor and encased it in little bricks. It’s madness.

Into building things from blocks, are you? Let me direct you to the best Minecraft maps on the net. You’ll love them.

Mike Schropp, the builder who masterminded the Lego Tower Computer, has been tinkering away with impressive Lego-based systems for over five years now, and has obviously picked up a few tricks along the way. What’s so striking about this machine is that it’s barely recognisable as a gaming PC, both internally and externally.

The Lego Tower Computer is built around an unusual, modular form factor designed to keep cooling optimised. Because however many practical applications for Lego you can think of, keeping electronic equipment cool will never be one that springs to mind.

Pushing the pixels is a custom-built graphics card, which the LTC’s builders say operates at liquid cooling temperatures, only running on air cooling. And, I can’t stress this enough – encased in bloody Lego. 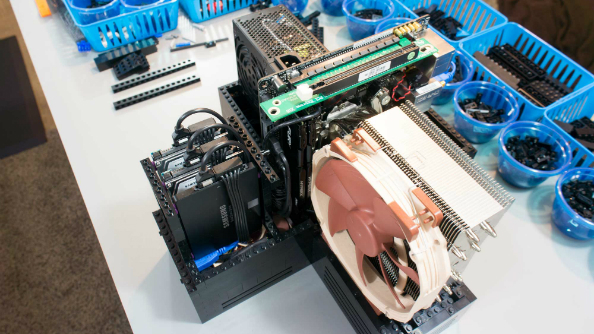 The claims get bolder still as we move up to the CPU enclosure, which offers “enhanced processor cooling beyond what any conventional air cooled case can offer,” says TotalGeekdom.

By keeping the main heat-emitting offenders (GPU, CPU, PSU) seperate in their own little Lego homes, the LTC’s design minimises hot air accumulating in one area. Instead, each component’s cooler only has to worry about the hardware it’s affixed to. It’s a similar idea to Thermaltake’s Level 10 cases, in their various incarnations, although they never took the modular principle to this extreme.

If you’re really into the whole Lego PC concept, Schropp and his gang will build you one. It’s even possible to upgrade parts within them.