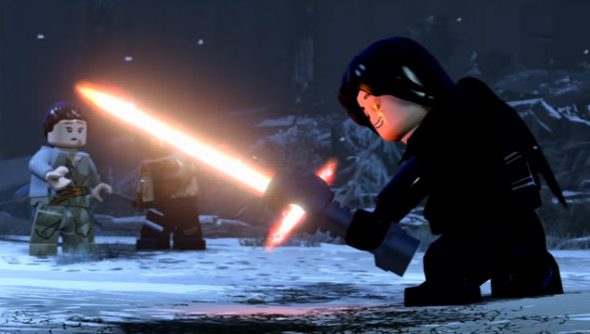 LEGO Star Wars is out soon, so obviously it was flaunting its wares at this year’s E3, showing off a new trailer that recreates some famous movie scenes with LEGO bricks.

There’s Kylo Ren having a strop inside his Darth Vader memorabilia-filled bedroom. There’s the Millenium Falcon returning to the stars. There’s Rey and Kylo Ren facing off with vegetables.

Yeah, it’s daft, but no more so than space wizards with laser swords.

Now I know LEGO games have been a bit samey for a while, but this latest has a few new tricks up its sleeve. Firstly there are dogfights, both in arenas and in linear chase sections. There will also be a bit of cover shooting thrown in.

I played a short section a while back and it seemed fun enough. Anyone who’s seen the movie will certainly get something out of it. It also digs into some stuff that’s not in the film, like how Han and Chewie got the Rathtars, that sort of thing.