Update: The official Lego Star Wars: The Force Awakens trailer and information has now been released from Warner Bros.

Warner send word that they’re now ready for the world to see the full length version of the trailer for the next Lego game, based on The Force Awakens. It’s got about twice as many lightsabres, laser blasts, homages, pieces of toast and minutes in its runtime as the ad from this morning. They’ve also officially announced all the information that we reported from the leaked Xbox page earlier.

Will it fit into our list of the best Star Wars games? That’s the important question.

Without further ado, here’s the trailer:

Definitely a BB-8/8 on the adorable scale, and paying dues to what must be one of the most watched trailers of all time is a good call. That water-skimming moment with the X-Wings is an all time classic for me, now. I’ve only really gotten into the first Marvel Lego game, but I’d really like to see what they can do with this film.

There’s some more screenshots and talk of exclusive content we won’t get our hands on (but then probably will later down the road) in the announcement post on the official Playstation blog. Otherwise, read on for the post from this morning with all the details.

Original Story:Lego Star Wars: The Force Awakens, perhaps the most inevitable game in the history of anything, has had its existence leaked via a number of sources. It will be coming to PC, consoles, old-gen and various handhelds on June 28th and there’s a 30 second trailer as well as a batch of screenshots been revealed. A listing on Amazon Italy was spotted last night, while a YouTube ad for the game also played before various videos and Xbox erroneously put the store page up before an official announcement went out. Whoops on all fronts, folks.

First up, here’s the trailer, screen-capped from a YouTube ad by user Games Cage. We’ll replace with the official version when it inevitably appears:

Usual Lego comedy, brand new Star Wars shell. Lego BB-8: could there be a cuter thing? And poor Kylo Ren seems to be taking from his Twitter persona more than movie one. Maybe it will have a happier ending?

Meanwhile, as spotted by AGB, an Amazon page went live on the Italian version of the site, showing various prices. As far as PC goes, it was €29.99, slightly below the norm for triple-A games but in keeping with the standard price of Lego titles. It has a different, presumably placeholder, date listed, as the official trailer and Xbox page agree on June 28th. 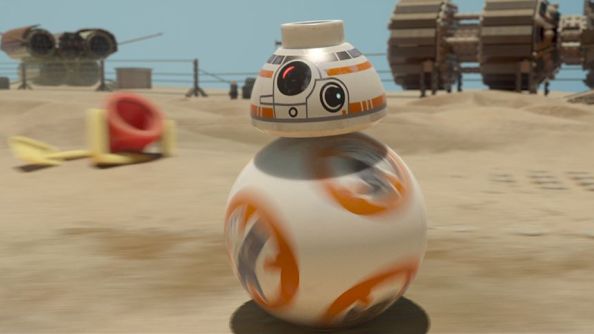 Speaking of, here’s that page on the Xbox store. There’s a load of screenshots on there, which we’ve mirrored to this imgur album in case it gets taken down. It also has this tidbit about what will be in the game:

“The game will also feature exclusive playable content that bridges the story gap between Star Wars Episode VI: Return of the Jedi and Star Wars: The Force Awakens.”

The only stuff we’ve seen from that era so far is the Battle of Jakku in Battlefront and one tie-in novel, I believe. The labyrinthine mess that is Star Wars expanded universe content is alien to me, so I may be missing something.

As for the game itself, it has two new features on top of everything you’ll be used to from every Lego game you’ve played or seen. Multi-Builds allow for branching paths that can be altered on the fly, using bricks to build one way, blowing it up, then building another. It also has something called Blaster Battles, which sound like a cover-based shooter element whenever you come across the First Order bad guys.

This is likely what Warner Bros. teased yesterday, saying they had an announcement that involved “two of the world’s most popular entertainment brands.” We’ll update this post when they plug all the gaps and release a proper trailer.