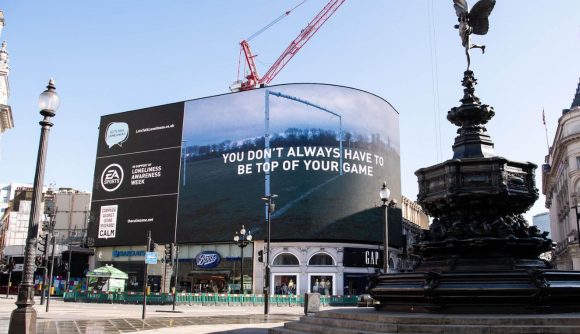 The campaign features as part of the ongoing Loneliness Awareness Week – running from June 15 through 19 – which calls on players to “use their love of games as a way to combat loneliness during these difficult times”, as announced in a press release. It’s been launched by the UK’s Department for Digital, Culture, Media, and Sport (DCMS) to encourage people come together through a shared love of games and talk about their feelings, particularly if they’re experiencing anxiety or loneliness in the wake of the COVID-19 pandemic.

“In times like these,” head of EA, Samantha Ebelthite, says, “it’s more important than ever for people to talk and share their feelings with friends. Over the last couple of months, we’ve seen even more people using games as a way to stay home but connect with others.

“We’re therefore encouraging all gamers to set up a game with friends or family and use the opportunity to talk about how they’re feeling,” Ebelthite adds. “We may be far apart but games can bring us much closer together.”

According to CALM research, the release explains, “six-in-ten people in the UK said they are experiencing anxiety during the COVID-19 pandemic, but almost a third (30%) said they would not they are not likely to talk to someone if they are struggling with their feelings.”

At Piccadilly Circus this week, as part of #LonelinessAwarenessWeek, you can see the CALM logo up on the big screens as we teamed up with @EASPORTS & @Copa90 to share an important message about talking to people and checking in on each other. #LetsTalkLoneliness pic.twitter.com/tCE0HgAo9R

In addition, a recent Office of National Statistics study has found that people aged between 16 and 24 are 50.8% more likely to have experienced feelings of “lockdown loneliness” following the outbreak.

“Playing videogames has given many people enjoyment at home during lockdown as well as being another way for people to stay in touch with friends and family,” minister for loneliness Baroness Barran says. “This Loneliness Awareness Week, it’s more important than ever that we stay connected and I’m delighted Electronic Arts and CALM are supporting our campaign.”

The games industry is encouraging us all to #LetsTalkLoneliness by running #PlayandTalk this weekend!

Find an hour this weekend with friends of family
2. Pick your favourite online game
3. Play and Talk together

In addition, the UK Games Industry has also announced that this coming weekend – 20-21 June – it’s launching a ‘Play and Talk’ event as part of the #LetsTalkLoneliness campaign. It encourages anyone and everyone, regardless of whether they consider themselves to be gamers, to “find just one hour to play together online, re-connect with loved ones or friends, and have a conversation with the aim of reducing loneliness.” Head to Ukie’s site here to find out more about the initiative.

You can also find resources on CALM’s website here and the Let’s Talk Loneliness support page here if you’re looking for help or advice.