To curve or not to curve? That is the question when it comes to large-format gaming monitors. When you’re talking about something the size of a 32-inch display do you want to have all that screen real estate on a completely flat plain in front of you, or do you want it to gently curve in at the edges?

With the LG 32GK850G sat side-by-side with the Asus ROG Strix XG32VQR I’m still not entirely sure which I prefer. This LG stands ram-rod straight on the desktop, while the slinky Strix curves in towards me. They are ostensibly the same size, and yet the LG feels like the broader panel… which it kind of is, in 2D terms at least.

The other difference, of course, is that one is an Nvidia G-Sync screen and the other is in Camp AMD, with its FreeSync 2 HDR leanings. Though those two previously disparate frame-syncing features are not as far away from each other as they once were, given Nvidia’s grudging acceptance of the Adaptive Sync technology as something its GPUs can now take advantage of.

But despite the G-Sync hardware baked into the innards of the LG 32GK850G (gotta love gaming monitor naming conventions… so catchy) it’s not actually retailing for that much more than that FreeSync 2 HDR screen. You can pick this beautiful-looking VA monitor up for $577 (£662), and the Asus ROG display is on sale for about the same cost.

If you were an Nvidia gamer, hoping to save a little cash opting for a decent FreeSync panel to hook your GeForce GPU up to, then the LG G-Sync monitor might just change your mind. It’s a full 32-inch AU Optronics AMVA panel, with a 1440p native resolution, and the ability to overdrive the refresh rate up to a heady 165Hz. 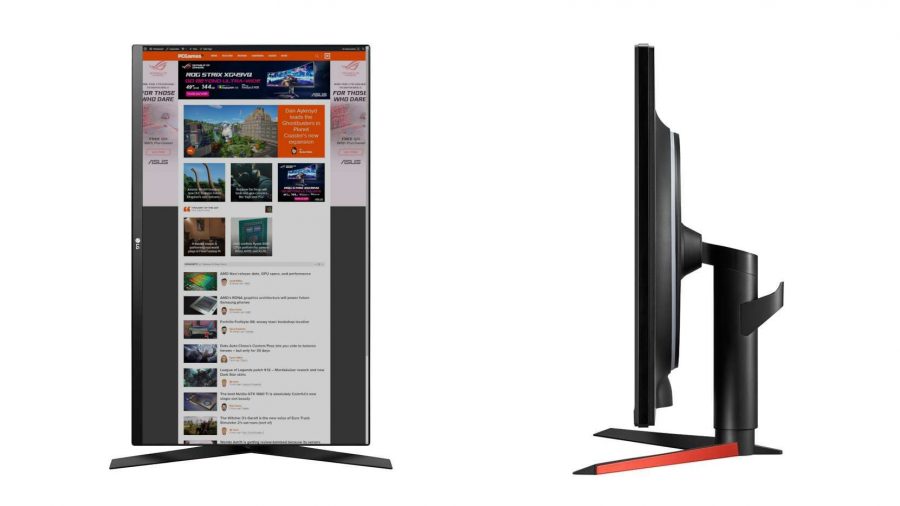 It’s an 8-bit display and, though the panel itself has been manufactured by AUO and not LG itself, the backlighting has been supplied by the Korean screen manufacturer. The typical peak luminance rating is nothing to really write home about, coming in at 350cd/m2, and so isn’t going to sear your retina from your head. Even at its highest brightness settings, which it seems to have set at the top by default, the panel is unlikely to give you a migraine. There’s no flickering either, which also helps in the brain-ache department.

All that does mean the LG doesn’t come with any HDR pretentions, but given the paucity of HDR support for PC gaming I’d argue that shouldn’t really be on your must-haves checklist when you’re looking for a new gaming monitor anyway.

The anti-glare screen coating is there, but it’s mercifully unobtrusive, with none of the gritty or sparkly effects that some other panel coatings end up displaying. And the frame itself adds to the feeling of LG not wanting anything to get between you and the visuals on the display. The three-sided slim bezel looks great, and the stand is simple and relatively stylish. In fact there’s very little here to shout about its gaming heritage.

Ah no… my mistake… there’s a massive ring of RGB LEDs on the rear side of the panel. Classic. 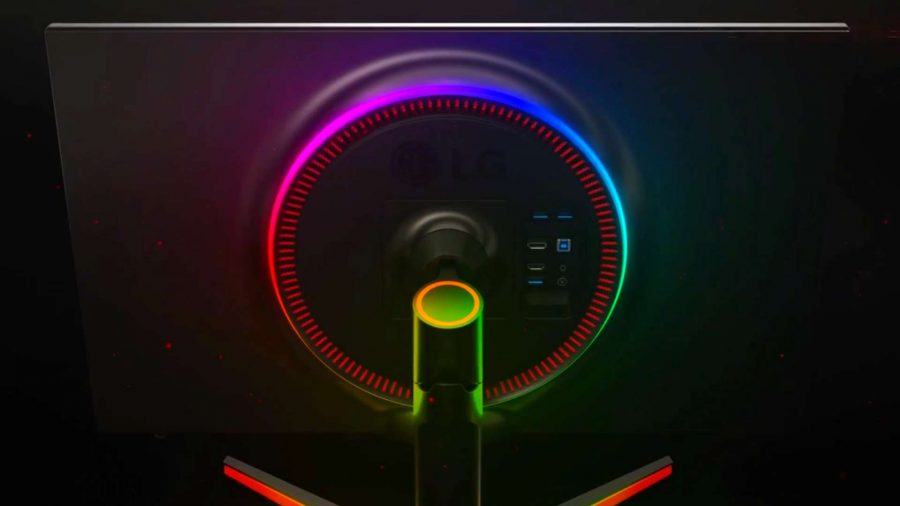 At this 32-inch scale that’s often where you’d suggest going for a curved panel instead, because with inferior panels you can get increased discolouration as the screen stretches away from your eyeballs at the edges. With this impressive LG monitor that’s not a problem.

In terms of that AUO panel, the contrast levels are excellent, showing a clear difference between the shades all across the colour spectrum. And even with the Black Stabiliser turned off the AMVA display has a pretty decent black levels. The Black Stabiliser is an LG gaming feature which boosts the darker tones of a scene to help promote detail where you might not otherwise see it.

The example given by the LG marketing fluff is of you being able to see that sniper who’s about to take your head off, where you wouldn’t have seen them before. And it’s not a bad little feature. At the top level it does grey things out a little too much, but at the lower levels it gives enough extra tonal detail to make it worth using. And it doesn’t end up functioning at the expense of blowing out the white saturation levels either, something other manufacturers’ lightening features can do. 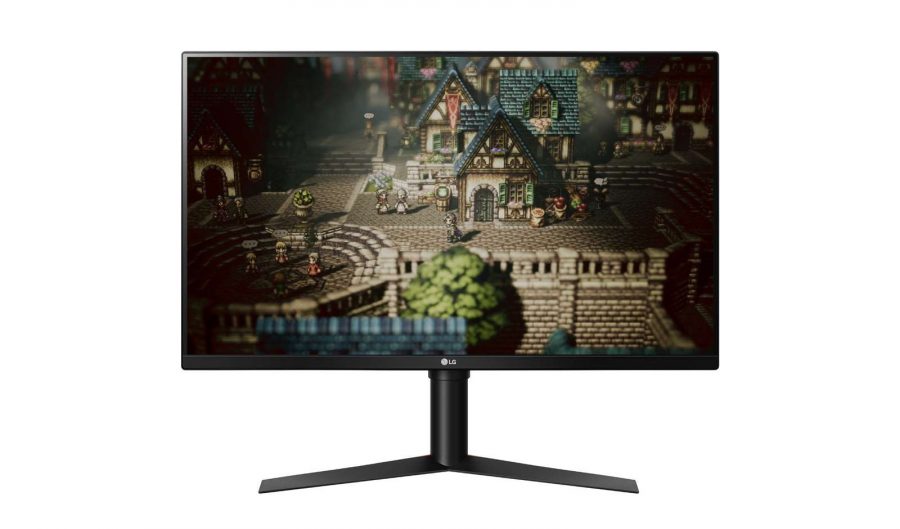 And the display looks good when you’re gaming too, with the high refresh rate syncing up with your high-performance graphics card. Y’know, if you have one. With a super-high refresh rate you kinda want to make sure you’ve got a GPU that’s capable of delivering high frame rates at the 2560 x 1440 native resolution of the screen. Though I’m not 100% sure if the overclocked 165Hz setting is really the way to go with gaming as it sometimes looks more comfortable in-game at 144Hz or even 120Hz.

But, on the whole, the LG 32GK850G offers a great gaming experience, on par with almost any of the similarly priced options we’ve picked in our best gaming monitor round up. I’d still say the geriatric PG279Q has the superior panel – I love me an IPS screen and the Swift still remains the one I adore – but this broad LG is a little cheaper and still a genuinely quality gaming display.

A very good flat-screen gaming monitor, with a crisp panel, stylish chassis, and high-quality in-game visuals. Perfect if you can't stand the curve...