Few MMOs put as much emphasis on cooperative play as the currently in-beta Life is Feudal: MMO. It’s a game with sprawling player-run townships, where every building has been painstakingly constructed, log by log. A single, squalid hut can take upwards of five hours to build, requiring you to go out into the wilderness to chop down trees, before hauling each log back to your plot of land at a snail’s pace. With a team of three or four it’s a spot of toil that promises all the satisfaction of a job well done. On your own it’s ill-advised at best, and practically impossible at worst. but I’m not one to shy away from a challenge, which is why I put the MMO through its paces on my tod, ignoring invitations from other players to join their flourishing guilds, determined to make my mark on Life is Feudal: MMO’s persistent sandbox.

For more massively multiplayer action, check out the best MMORPGs on PC.

As it happens that mark was a string of barely-dressed bodies, a bedroll or two and one sickeningly smug boar. But even if I failed to make a proper mark on the cruel, cruel world of Life is Feudal: MMO, it certainly left its mark on me. Here are six valuable life lessons that you’ll only know if you’ve spent ten hours alone in a virtual forest during the early feudal period. 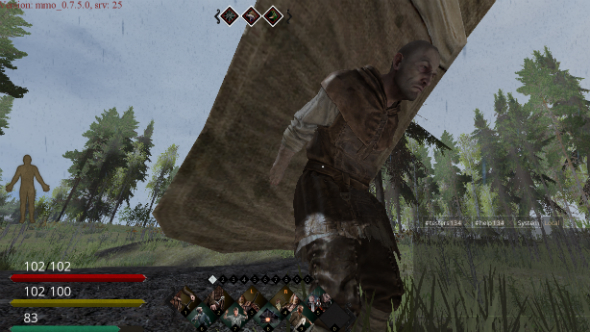 In a game where even assembling a bedroll takes twenty minutes of gathering together plant fibres and branches, the temptation to turn to petty theft and steal someone else’s cosy straw mat is often too much. They’re probably in a similar situation to you: desperately trying to make it on their own, out on yet another hour-long search for precious fragments of flint. Maybe they’ve even stumbled upon a seemingly abandoned camp and are pilfering themselves a few apples and pieces of edible taproot from an inviting bark chest.

Stealing an entire bedroll, however, just isn’t worth it. Despite the fact that they’re made of a few pieces of light material that you’d ordinarily be able to carry in your in-game pockets, a constructed bedroll is apparently as heavy as a tree trunk.

Carrying this all the way back to my own base took hours. Making one of my own would have been infinitely more efficient. My character was also hungry after the long journey, and I’d surely just made of an enemy of the only person I’d (sort of) met in three hours of grim survival.

Boars are territorial, but they’re not killers 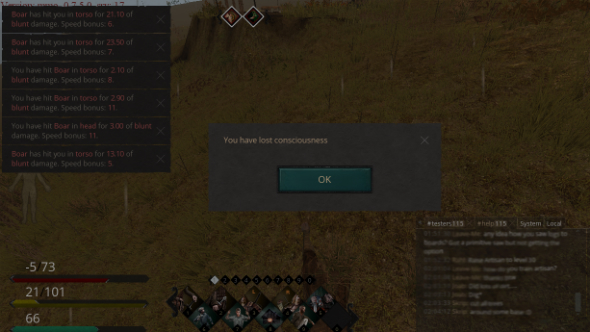 Life is Feudal: MMO has an assortment of wildlife to be hunted, killed or tamed, including hares, grouse, deer, moose, wolves, bears, aurochs, sheep and boars. They all behave differently, too. For example, bears will attack you, hares will flee and moose will ignore you unless you deal a certain amount of damage to them. Boars on the other hand are territorial creatures, and tenacious fighters too.

Hungry, worn out from carrying logs to and from my cliffside campsite, I decided that boar would be a decent dinner for intrepid survivalist Jordo Fordo. Armed with a primitive axe that had previously been blooded with the sap of four fledgling aspens, I stalked my prey. Inevitably, the boar noticed me. I prepared to give chase, but the boar had different ideas – we traded blows, but after a few gores and headbutts I had been knocked unconscious. The boar had bested me, but he had let me live. 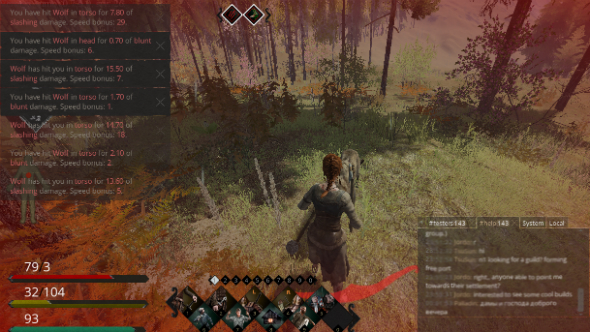 The boar had taught me mercy and honour, but his kindness had left me stupid and naive to the true evil of this virtual world. My next animal encounter was with a wolf, fabled mother to Rome and much of the civilised world, but in my presence a great big ferocious prick. Apparently, a primitive axe is absolutely useless as a weapon. I got a good few swings in, but in roughly ten seconds the wolf had mauled me to death. Death being much, much worse than unconsciousness.

Turns out though, that in Life is Feudal: MMO death is only the beginning of an even more arduous attempt to carve out an existence. Not only will you be spawned right back in the middle of the map without any of your equipment, your stats will also be severely impaired, making you weaker, less energetic and more stupid. At this point you might as well just start a new character. 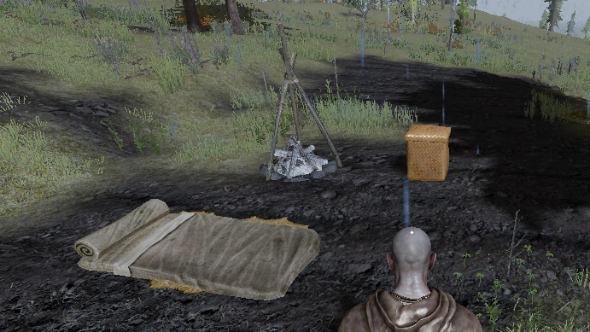 I got through three characters during my ten-hour stint playing Life is Feudal: MMO. There was Jordi Fordi, who died before I even started taking screenshots – he picked a fight with another player and was swiftly put down. Then there was Jordo Fordo, the aforementioned victim of a cruel, malicious wolf. Leave-Me Alone, my alt who had already survived a terrifying encounter with a wild boar, was the only one yet to feel Death’s cold embrace.

Compared to the rest he was a veritable Ray Mears, having set up a small campsite, complete with bark chest, campfire and bedroll. He had an axe to defend himself and had set up near an apple grove, ensuring a good source of nutrition while he trained to one day go back and beat his old foe, the boar. 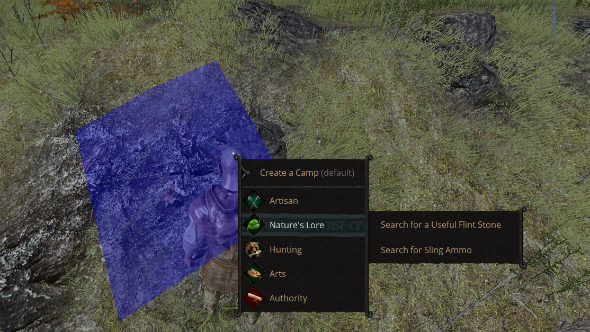 First on the priority list was to make a home though, which meant chopping down some trees and sawing them into logs. That meant crafting a primitive saw, which meant getting some flint. Somehow I’d got it into my head that it would take a brief hike before I stumble upon some flint. It took two hours, and by the time I found a source of the infinitely useful stone I had completely forgotten where my camp was. The camp I had spent two hours building. Either way I was about to spend a further two hours getting my feudal life back in order.

Home is where the heart is 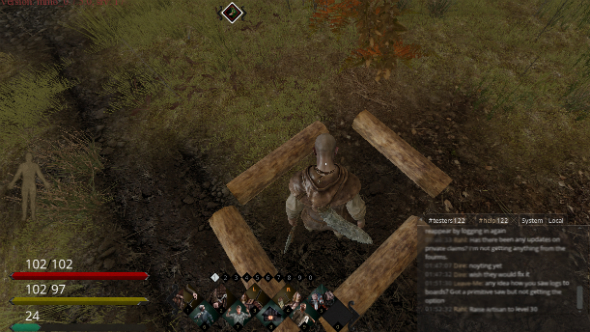 Having just finished the epic search for flint, I decided it was finally time to build my first proper home in Life is Feudal: MMO. As you can see from the picture above, it did not go as planned.

I was perfectly situated: a cluster of trees sat to the north of my camp, flint to the west and a lake for fishing to the south – there was even a sizeable township to the east if I needed to flee from any wolves or boars. I had also managed to craft a primitive saw, now just to set about gathering logs, sawing them into planks and building my house.

Except, it turns out that you need an Artisan skill of 30 to saw logs into planks. Huh. Not relishing the grind, I improvised. 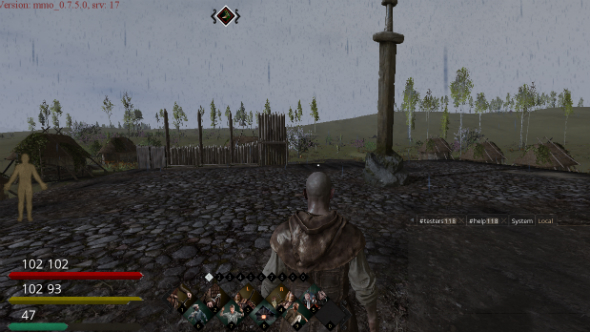 Life is Feudal: MMO had not proved particularly welcoming to my three lone survivors. So begrudgingly I decided to try and make friends with the settlement to the east of my camp. In retrospect, naming my character Leave-Me Alone was not a wise decision, and sure enough everyone I turned to for help blanked me outright. Like this guy. 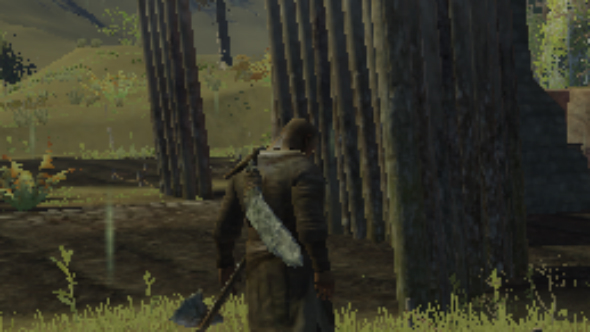 This man was desperate not to acknowledge my existence. You can hurt yourself doing that. 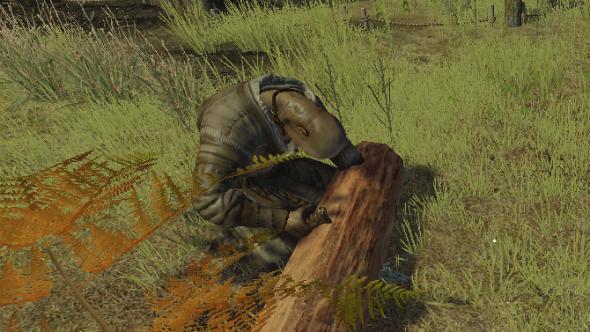 Even my old foe the boar wanted nothing to do with me. Just look at him trying to slink away. 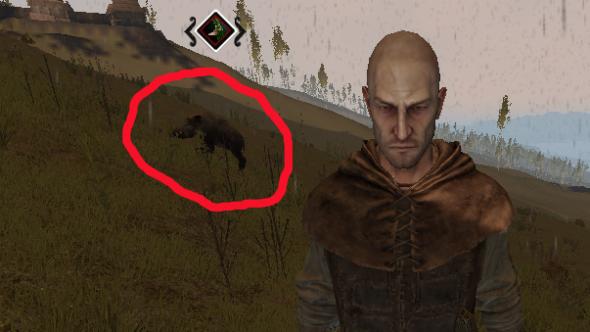 Just me and these four walls to keep me company, until I succumb to starvation or someone wanders by and burns it all to the ground with a torch. Life is futile, more like. Oh wait, the title is a pun

Had a chance to play Life is Feudal: MMO? Let us know what you thought of its hardcore survival mechanics in the comments below.